Shark Knocks Boy Off His Surfboard In Chilling Video

"When we looked back I saw it was actually a shark," Chandler Moore said. 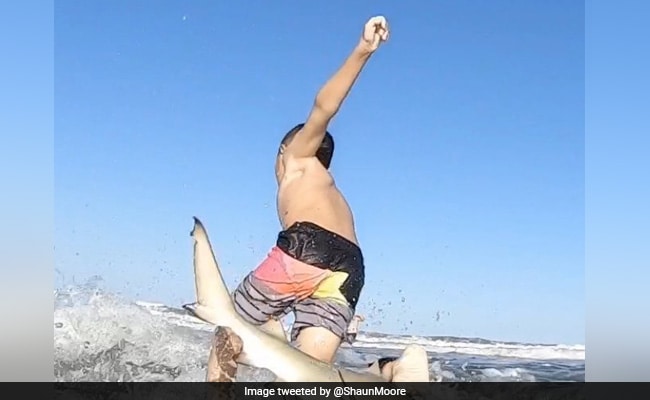 A shark knocked a boy off his surfboard in Florida.

A seven-year-old boy in Florida was knocked off his surfboard by a shark, and the whole incident captured in a chilling video. Chandler Moore and his family went to New Smyrna Beach on Saturday to surf. His father, Shaun Moore, told CNN that the beach was crowded and "there were a ton of surfers out" when they went into the water.

Chandler Moore, who has been surfing since he was four, was knocked off his board by a shark leaping out of water.

"I was just surfing and then I saw two fish," Chandler told CNN. "I thought the thing that hit me was a fish."

According to Shaun Moore, the shark appeared to be a small blacktip shark that are very common in New Smyrna Beach. In fact, experts call the area the shark attack capitol of the world and according to National Geographic, it is estimated that anyone who has swum there has been within 10 feet of a shark.

The scary incident, however, hasn't dampened Chandler's enthusiasm for surfing. "I still have no concerns. So basically, I want to keep surfing some more," Chandler said to news website WESH Orlando.

In September, a surfer in Australia was warned of a rapidly-approaching shark by a drone operator.