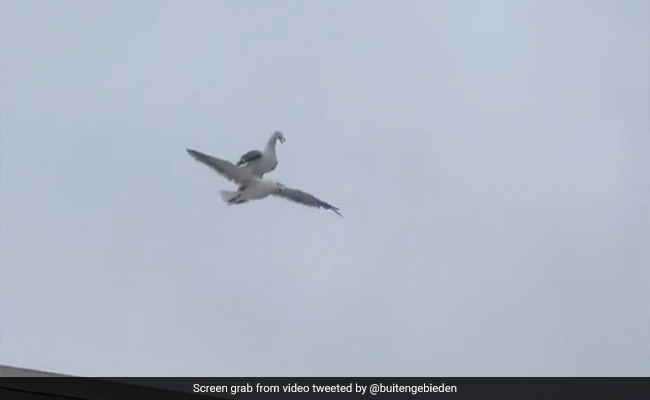 The video quickly drew the attention of social media users and went viral.

Seagulls are intelligent birds with strong bodies, longish bills, elongated legs, and webbed feet. A recent video of a seagull riding on another bird has gone viral, proving that the widespread belief in their intelligence is correct.

The video, which was shot in Lincoln County on the Oregon Coast of the United States, was shared on Twitter by the handle Buitengebieden with the caption "Seagull taking a free ride.."

The video depicts a seagull riding on the back of another bird. This is not an everyday occurrence in the sky. As evidenced by the exponentially increasing views of this 6-second video, this is a rare thing that people are amazed to see.

This brilliant bird has impressed everyone who watched the video online. The video quickly drew the attention of social media users and went viral. Within a few hours, the video had over 7,72,000 views, more than 3000 retweets, and 25,190 likes on Twitter. Social media users flooded the comment section with heart emojis, completely enamoured with the bird's alertness.Some of them even compared it with NASA's Shuttle Carrier Aircraft.

"NASA's shuttle appears to have been aboard a Boeing 747 SCA during its flight over Rome in 1983!" wrote one user.

"They're clearly How to Train Your Dragon fans," commented another user.

"I've been watching seagulls all of my life and have never seen anything like this," wrote the third user.

Arvind Kejriwal's Appeal To Youth, Women In Gujarat Ahead Of Polls