"Had a close call with a falling banner and a metal bar," Richard Branson wrote on Twitter 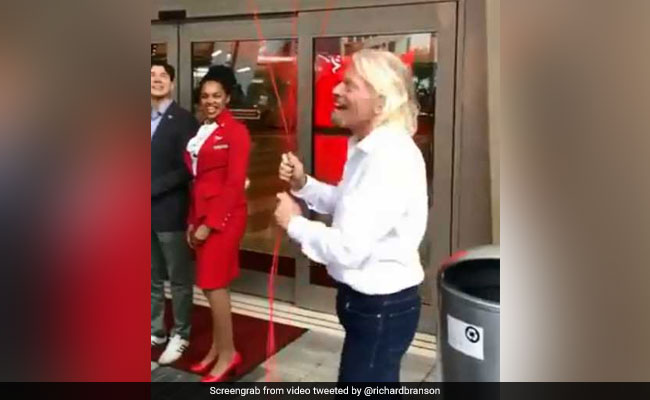 Richard Branson narrowly missed getting hit by a metal bar during a recent event.

Business tycoon, author and founder of the Virgin Group of companies, Richard Branson, recently had a "close call" with a falling banner and a metal bar. Luckily, the metal bar missed him by a few inches, averting a serious injury. The hair-raising incident was caught on camera and the video tweeted by the billionaire himself this afternoon.

The accident occurred during the unveiling of the Virgin MiamiCentral Station in Miami, Florida, which the English businessman was attending. The video shows him holding on to a couple of strings that support the banner as people around him count down from 10. However, as soon as Mr Branson lets go of the strings, the banner and the metal bar come crashing down on him.

"Had a close call with a falling banner and a metal bar," he wrote on Twitter while sharing the video.

Had a close call with a falling banner and a metal bar at the @VirginMiaCntrl unveiling… https://t.co/bPMHZ3rJZVpic.twitter.com/SQGJExTKPJ

Since being shared online, the scary video has collected a ton of shocked comments. It has also been viewed over 9,000 times in just half an hour.

"An angel was watching over you," wrote one person, commenting on the close shave. "OMG. That was close!" said another.

Mr Branson has yet to comment on the incident.

These Small Animals Took On A Pride Of Lions - And Won. Watch Crazy Video