Reggie the royal python escaped when Tim Yardley moved a few houses away and he had almost given up hope of ever finding him. 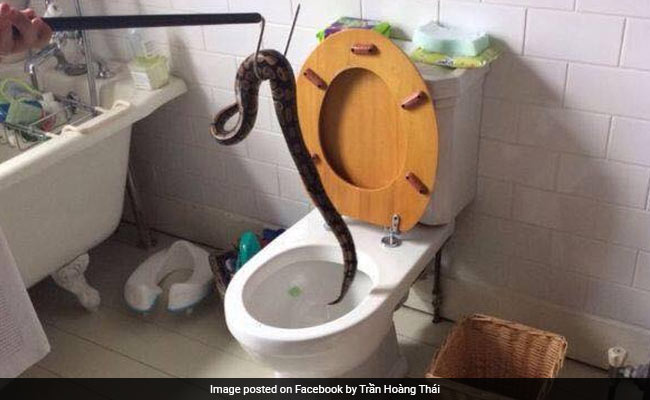 The harmless snake, measuring about three feet petrified Laura Cowell and her son.

London: A python that shocked a five-year-old boy and his family when they discovered it in their toilet might have been on the loose in the area for about two months, it emerged today.

The boy discovered the unwelcome visitor when the boy opened the lid in his family bathroom in Southend. Following media coverage of the snake's rescue his owner has now come forward, the BBC reported.

Reggie the royal python escaped when Tim Yardley moved a few houses away and he had almost given up hope of ever finding him.

The harmless snake, measuring about three feet petrified Laura Cowell and her son when it appeared in the family's toilet last Wednesday.

"He was frantic, and shaking, and I could tell something was wrong, but that was not what I expected," she said. Local reptile specialist Rob Yeldham, owner of Leigh-on- Sea pet shop Scales and Fangs came to the rescue, prising the python from the porcelain.

His owner recognised Reggie from the media coverage and contacted Yeldham to show him photos of his missing pet. "Snake markings are like fingerprints and unique, so comparing them to our snake I am 100% certain we've found Reggie's owner," Yeldham said.

Reggie apparently made his bid for freedom the night his owners moved into their new home.

"During the move one of the air vents on the enclosure got dislodged and... Reggie was able to pull the air vent off his enclosure and escape his tank," Yeldham said. "We believe from there he made his way into the toilet system.

"He was out for about two months... before he finally made his way up into Laura [Cowell]'s toilet where her son unfortunately came face to face with him."

As royal pythons are harmless, "there's no-one really to report a missing one to" and putting it on social media can "create panic", Yeldham said.

Promoted
Listen to the latest songs, only on JioSaavn.com
He thanked the rescuers, and added: "I'm just glad he ended up in safe hands, my full apologies to the family and their little boy who found him under such circumstances". Reggie is suffering from some scale rot because of the bleach in the toilet system, but once recovered will be returned to his owner "once we check he has a secure vivarium", Yeldham added.