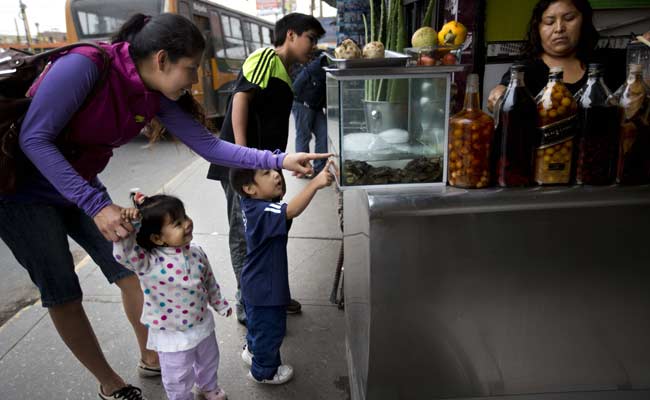 Lima, Peru: Frogs from Peru's Lake Titicaca are the main ingredient in a juice blend that some Andean cultures believe has the power to cure asthma, bronchitis, sluggishness and a low sex drive.
To make the mix, which is sold in Peru's Andes and also at some stands in its capital Lima, vendor Maria Elena Cruz grabs a frog from a small aquarium then kills it by beating it on the counter of her stand.

She peels off the skin and drops it into a blender with carrots, the Peruvian maca root and honey.

The juice is a greenish color and Cruz serves it in glasses to her customers.

"Frog juice is good for anemia, bronchitis, bones, the brain, fatigue, stress and it is mostly children, adults, persons with anemia, respiratory issues and sometimes tuberculosis" who come to her stand, Cruz said.

There's no scientific evidence that confirms the frog juice's benefits.

The frogs are from the Telmatobius culeus species locally known as the Titicaca water frog. It is listed as critically endangered by the International Union for Conservation of Nature.
Cecilia Cahuana, 35, is a fan of the frog juice and says "it immediately cures asthma, bronchitis, it has vitamins and plenty of proteins."

Promoted
Listen to the latest songs, only on JioSaavn.com
Most of the customers at Cruz's juice stand are from the Andean region that borders Bolivia, where it is also popular.