The clip showed an elephant breaking an electric fence, crossing the road and disappearing into the forest. 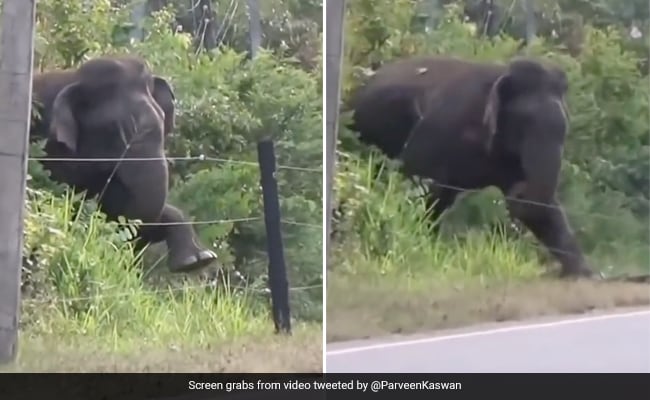 Elephants are exceptionally smart creatures. Every now and then we come across videos on social media which capture the essence of their intelligence perfectly. Now, an old video showing the cleverness of this majestic animal aptly is gaining traction online once again.

Indian Forest Service (IFS) officer Parveen Kaswan shared the video on Twitter on Monday. The clip showed an elephant breaking an electric fence, crossing the road and disappearing into the forest. "We are too smart hooman !! See how this elephant is smartly breaking power fence. With patience," Mr Kaswan wrote in the caption of the post.

We are too smart hooman !! See how this elephant is smartly breaking power fence. With patience. pic.twitter.com/0ZLqWvmxdu

In the video, the elephant is first seen checking the current flow in the electrical fence by lightly touching the wires. Seconds later, it is then seen trying to push down the wooden pole of the fence in order to break it. At one point, the giant tusker even uses a log to make its job easier. Finally, at the end of the clip, it manages to break the fence and disappear into the forest.

What's more interesting in the video is that the giant elephant does all this while keeping itself safe.

The video was initially shared in 2019 but it has again left social media users stunned. While some called the elephant "clever", others called it "intelligent".

"Clever elephant. When humans have encroached every micro inch of land and created barriers everywhere, what else can other species do?" wrote one user. "Without access to any labs and R&D, they are proving better than us. And they never intend to harm others," said another.

A third commented, "We should not underestimate them, it's really cool." A fourth added, "Majestic and smart."

Since being posted, the video has accumulated more than 78,000 views and over 4,500 likes.