"We know that in Russia they have had domestic whales in captivity and also that some of these have apparently been released." 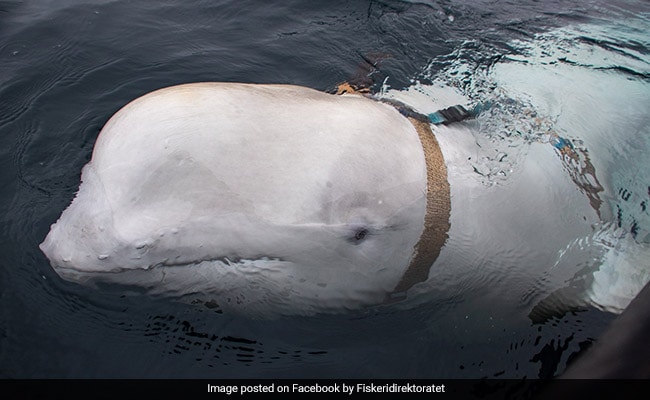 A beluga whale was found wearing a harness apparently made in Russia.

A beluga whale was found by Norwegian fishermen wearing a harness that appeared to be made in Russia, prompting speculation the animal may have escaped from a Russian military facility. ITV News reports that the discovery of the whale sparked fears in the Scandinavian country, and an investigation has been launched.

The tame beluga whale approached Norwegian boats off Ingoya, an island about 415km from Murmansk, where Russia has a naval base, reports BBC.

Joergen Ree Wiig of the Norwegian Directorate of Fisheries fisherman Joar Hesten, along with Mr Ree Wiig, jumped into the frigid waters of Arctic Norway to remove the harness from the beluga whale on Friday. The harness strap had the words "Equipment St. Petersburg" written on it, and had a mount for an action camera, reports Euro News.

Pictures of the whale and its harness were shared online by the Directorate of Fisheries.

According to ITV News, Norway's Aftenposten newspaper reported the Russian military is believed to have trained sea mammals for espionage.

Audun Rikardsen, an arctic and marine biology professor at the Arctic University of Norway, was quoted as saying by the Daily Mail: "We know that in Russia they have had domestic whales in captivity and also that some of these have apparently been released. Then they often seek out boats.

"A Russian colleague said they don't do such experiments, but she knows the navy has caught belugas for some years and trained them - most likely it's related to that," he added to BBC.

However, in an interview to Russian broadcaster Govorit Moskva, Col Viktor Baranets of Russia shrugged off Norway's concerns.

"If we were using this animal for spying do you really think we'd attach a mobile phone number with the message 'please call this number'?" he said. "We have military dolphins for combat roles, we don't cover that up."