Navya Naveli Nanda, who recently started her own podcast 'What The Hell Navya', keeps her Instagram family updated by sharing amazing pictures. 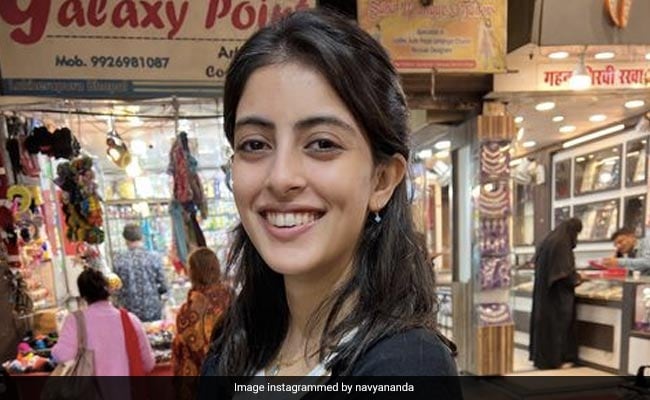 Navya Naveli Nanda was in Bhopal recently and shared photos from the trip.

Navya Naveli Nanda, the granddaughter of actor Amitabh Bachchan, has shared some photos on her Instagram from her recent Bhopal trip, which are going viral now. In the photos, she is seen visiting the city's markets, gorging on street food and getting a haircut. She also posted photos of several shops she clicked, including a mirror selfie during the haircut. In the photos, Navya is seen wearing a white t-shirt, off-white pants, and a black jacket. The post has been liked by more than 92,000 Instagram users.

Navya's first picture in the photo carousel shows her smiling and posing before a few shops. The next one shows a crowded market. In the third photo, Navya is seen enjoying street food right outside a shop.

Navya has used a one-word caption with her post, the name of the city "Bhopal..." with a heart emoji.

Other users liked Navya's simplicity. "Such a real girl... nowhere can we see that starkid buzz.. this simplicity is just wayyyyy sexierr than those half naked dresses," one user commented.

"Navya you look so real and humble !! Enjoy n keep up the good work," said another.

Navya Naveli Nanda, who recently started her own podcast 'What The Hell Navya', keeps her Instagram family updated by sharing amazing pictures. On the Diwali, she dropped a happy picture of herself in an off-white traditional outfit and captioned it as "Happy Diwali".

On the work front, Navya Naveli Nanda is the co-owner of Aara Health.