Irrfan Khan had recreated the viral "Drake Approves" meme in 2017. 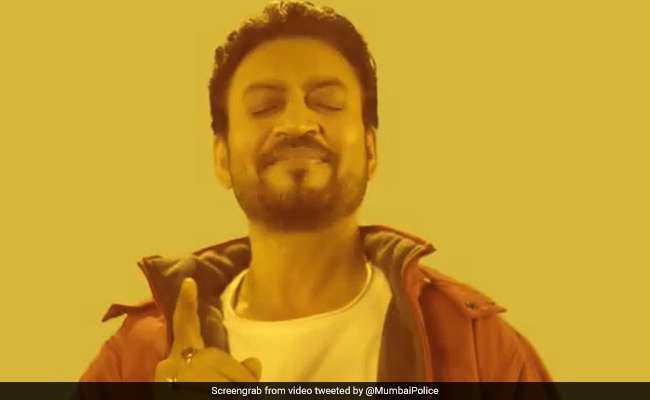 Mumbai Police has paid a moving tribute to actor Irrfan Khan, who died on Wednesday in the city's Kokilaben Dhirubhai Ambani Hospital. He was 53 and being treated for a colon infection. In 2017, Irrfan Khan had recreated rapper Drake's super viral "Drake Approves" meme for comedy group AIB. The actor's recreation had quickly become an iconic meme in itself, often being used in place of the original in desi posts. In their Twitter post remembering the legendary actor, Mumbai Police used the meme to raise awareness about social distancing as a tribute to Irrfan Khan.

The meme shows Irrfan Khan looking disapprovingly at "loitering during lockdown". He does, however, look favourably upon "Irrfan Khan movie marathon at home".

"Re-Meme-Bering Irrfan," wrote Mumbai Police while sharing the meme. "You have given the world many ways & means to keep you alive in our memories!"

They also added the hashtags #TributeToTheLegend and #RememberingIrrfan, among others.

You have given the world many ways & means to keep you alive in our memories! #RememberingIrrfan#StayHome#StaySafe#TributeToTheLegend#RIPIrrfanKhanpic.twitter.com/cxQfmrcKOA

Since being shared online this morning, the post has collected over 3,000 'likes' and a ton of comments.

Team mumbai police is so innovative. Proud to be a mumbaikar !

Widely considered to be one of India's finest actors, Irrfan Khan had starred in several international projects like The Life Of Pi and Jurassic World. He also featured in the 2008 blockbuster Slumdog Millionaire, which won eight Oscars.

Irrfan Khan was battling a tumour for several months. He had returned to Mumbai after treatment in London. In a statement released after the Piku actor's death, his family said that Mr Khan spent his final hours "surrounded by his love, his family for whom he most cared about." Read the complete statement here.

Bernie's Mittens To Lady Gaga's Skirt: Some Lighter Moments From The Inauguration