The video was posted by Vee, who graduated from Oxford along with her friend and Nobel laureate Malala Yousafzai. 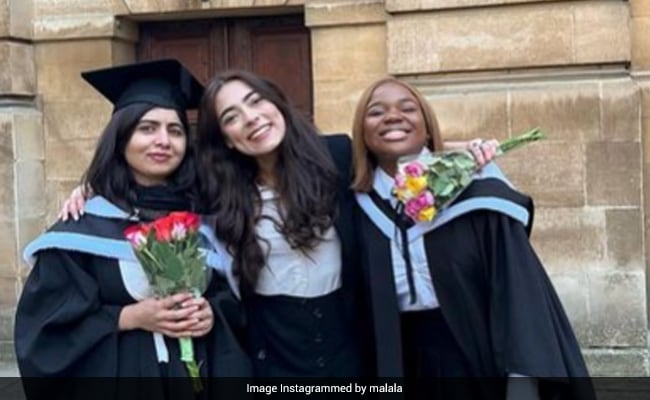 A video featuring Nobel laureate Malala Yousafzai is making waves on the internet. It has been posted by Ms Yousafzai's friend Vee and shows both of them in graduation robes. In the video, Vee talks about the opposite personalities of both the friends, which has created a strong bond between them.

"POV: There are two types of best friends and graduates in this world. Vee: giggly and chaotic. Malala: focussed and steady," says the text inserted as supers in the video uploaded a week ago.

While Vee is seen giggling while posing for the video, Ms Yousafzai has a calm expression.

The location of the video has been mentioned as Oxford University, from where both Vee and Ms Yousafzai graduated last year.

Vee, who is a girls' education advocate, author and empowerment coach, said in the accompanying post, "You haven't seen your best friend in 2 months because you're both travelling the world & doing the work that you love & so now you're you're rewatching all your cute memories because FaceTime/ texts just aren't doing the job."

The video has amassed more than 4.3 million views so far.

Malala Yousafzai graduated in philosophy, politics and economics from the University of Oxford in November 2021, nine years after being shot by the Taliban for campaigning for girls' education in her homeland, Pakistan.

She had shared the photos of her graduation ceremony on her official Instagram handle. In the pictures, she was seen posing in her hat and gown in the university, alongside her proud parents and husband Asser Malik.

Ms Yousafzai married Mr Malik, a manager with the Pakistan Cricket Board, in a low-key ceremony in Birmingham on November 9, 2021. In a tweet, she had then written, "We celebrated a small nikkah ceremony at home in Birmingham with our families."

She won the Nobel Peace Prize in 2014 when she was 17 years old along with India's Kailash Satyarthi.