Millions Can Relate To This Dog Who Is "Sick Of Quarantine". Watch

"This is me every school morning," quipped a TikTok user. 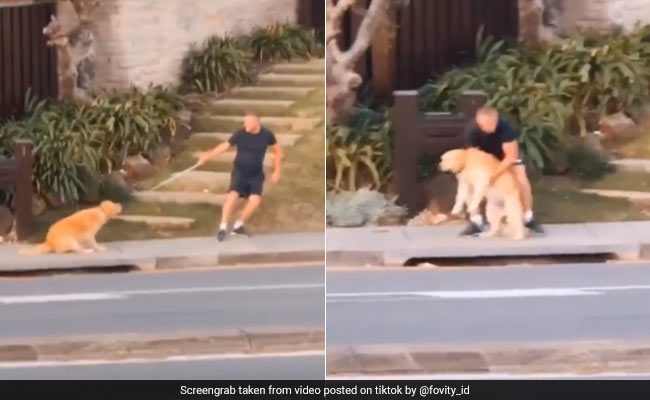 Elsie refuses to budge from the footpath in a hilarious video.

This dog seems to have caught the quarantine blues. A video filmed on Queensland's Gold Coast, Australia, that has gone massively viral online shows Elsie the golden retriever stubbornly refusing to go on a walk with her owner, Mike Cook. Instead, the dog was captured lying down listlessly on the pavement, refusing to get up.

"I was trying to take my dog for a walk and she wasn't in the mood for walking," Mr Cook said to ABC News. "We live about 100 metres from where that video was taken, let's put it this way when we turned around to go home, she ran home."

In the hilarious footage, Elsie is seen lying on the pavement, absolutely refusing to get up. The pampered pooch refuses to budge an inch despite repeated attempts by Mr Cook, who is finally forced to pick her up and put her upright. Elsie still refuses to walk, however, staying perfectly still as her owner tries in vain to drag her along.

"He's just sick of quarantine," wrote Kayla Evans who filmed the video and shared it on Instagram.

"We were just out with our neighbours one afternoon, having some drinks we were watching the dogs walking past," Ms Evans said to ABC News. "And this man walks past and all of a sudden his dog just stops and does not want to move.

"It went on for a few minutes and it was just so funny, we were in tears we just could not get over it."

The video has gone massively viral after it was reposted on TikTok. Watch it below:

what would you do if this was your dog? ???????? ##petlife##dog##foryou##foryoupage##learningtodog

Elsie and her struggling owner's video has been viewed a whopping 12 million times on TikTok, where it has also collected nearly 3 million 'likes'. Many took to the comments section to say that they could relate to the dog.

"This is literally me when I go outside," wrote one TikTok user.

"I've never related to something more! My golden does this all the time on our walks and it's so frustrating," said another.

"This is me every school morning," a user quipped.

Mr Cook described Elsie as a "really moody" dog to 7 News and said, "If she's not in the mood for walking, you're just not going anywhere. She'll just drop, play dead. There's nothing you can do."