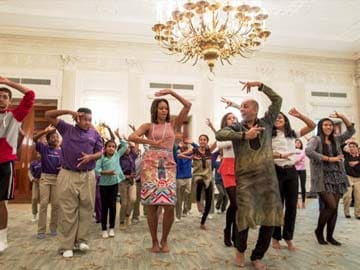 US First Lady Michelle Obama joins students for a Bollywood Dance Clinic in the State Dining Room of the White House in Washington. (File photo)

Washington: Michelle Obama's rhythmic dance moves to peppy Bollywood numbers during a Diwali bash has made it to one of the top White House photos for the year 2013.

Taken by Chuck Kennedy, the 49-year-old First Lady is seen doing Bollywood dance in the State Dining Room along with choreographer Nakul Dev Mahajan and students for a Bollywood Dance Clinic at the White House on November 5.

Released by the White House yesterday, these photographs are not ranked but arranged date-wise.

But the Bollywood dance pictures is among the 10 pictures on its homepage.

We commemorated the 50th anniversary of the March on Washington. We honoured our heroes, and bounced back from national tragedies and natural disasters.

Promoted
Listen to the latest songs, only on JioSaavn.com
"We strengthened our relationships with allies around the world, and took action to promote the American dream at home," the White House said.

Indonesian Dancers Wow The Internet With Their Recreation Of 'Bole Chudiyan'