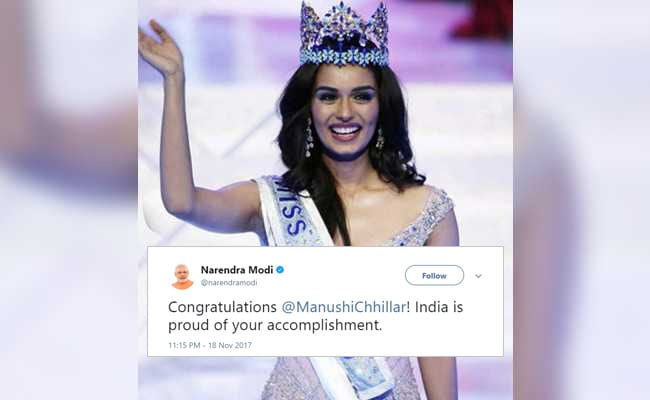 Miss World 2017: Wishes are pouring in for Manushi Chhillar, a 20-year-old medical student from Haryana

New Delhi: India's Manushi Chhillar has been crowned Miss World 2017 and as the nation celebrates the Haryana girl's beauty pageant win, the wishes are pouring in on Twitter. The hashtags #ManushiChhillar and #MissWorld2017 have among the top Twitter trends in India since the news broke on Saturday night. Ms Chhillar's win comes 17 years after Priyanka Chopra brought home the coveted title in the year 2000. The 20-year-old medical student from Haryana edged out top five contestants from England, France, Kenya and Mexico to win the crown in Sanya, China. The Miss World beauty pageant saw participation from 118 countries.

Ms Chhillar's Miss World win makes India the joint-most successful in the beauty pageant's history. Both India and Venezuela are the two countries with most victories in the history of the Miss World pageant, now in its 67th edition.

Best wishes to Manushi Chhillar for winning the Miss World title. May this inspire every young woman in our country to achieve her dreams, in whichever field she chooses

Congratulations @ManushiChhillar! India is proud of your accomplishment.

And we have a successor!Congratulations @ManushiChhillar on becoming #MissWorld2017.. cherish and learn, and most importantly enjoy it.Bravo

Congratulations to Miss World 2017 Manushi Chhillar on her achievement. Our young achievers make us proud. India's future lies in the indomitable spirit & excellence of our youth.

Haryana girls making India proud around the world. Many congratulations to @ManushiChhillar for becoming 6th Indian to win Miss World 2017. We all are proud of you.  #ManushiChillarpic.twitter.com/eeQEFHoWMv

.@ManushiChhillar Thank you for bringing that crown back to India after 17years. Congratulations India awaits to welcome you with colours of love, warmth & pride. #MissWorld2017pic.twitter.com/NIWyNlXmpY

Congratulations @ManushiChhillar! May your beautiful smile and grace always win over the world and help make a positive change #MissWorld2017#Indiapic.twitter.com/W0tMDZOmA1

Dear @ManushiChhillar!! Thank you for bringing that crown back to India after 17years. Thank you for your amazing answer about mothers. Congratulations. India awaits to welcome you with colours of love, warmth & pride. Jai Ho. pic.twitter.com/itdGLPcXDO

Congratulations @ManushiChhillar ... we knew you had all the qualities to conquer the world ever since we met u for the first time! You go girl! #missworld2017#proudmentor@vineetjaintimes@TOIIndiaNewshttps://t.co/8hcSikcqS8

If anyone ever told you, dreams don't come true, show them this! Coz dreams do come true, and only you came make them a reality. Good morning India :) It's time to celebrate @ManushiChhillar#MissWorld2017@MissWorldLtdpic.twitter.com/G0b6UAR6KJ

Ms Chhillar tweeted her thanks, writing, "Thank you, everyone, for your constant love, support... This one's for #India."

Thank you, everyone, for your constant love, support at prayers! @feminamissindia@MissWorldLtd#MissWorld2017 This one's for #Indiapic.twitter.com/kcnLV4C22P

Thank you for your kind wishes, sir! Honored & privileged to have represented our country #India. Will keep striving to make our nation proud always! #JaiHindhttps://t.co/BMAy4hsJSt

Thank you so much for your best wishes honorable Prime Minister sir! I am grateful to have contributed towards something that has made my nation proud! @feminamissindia@MissWorldLtd#Honored

Ms Chhillar impressed many with her answer during the Question and Answer round. She was asked which profession she thought deserved the highest salary and why.

Replying to the question, Ms Chhillar said it was not a question about a person's salary and that a mother was worthy of the highest respect.

"I think a mother is of highest respect. I don't think its just about cash but love and respect she gives to someone. She is the biggest inspiration in my life. Mother should get highest respect," she said to applause. 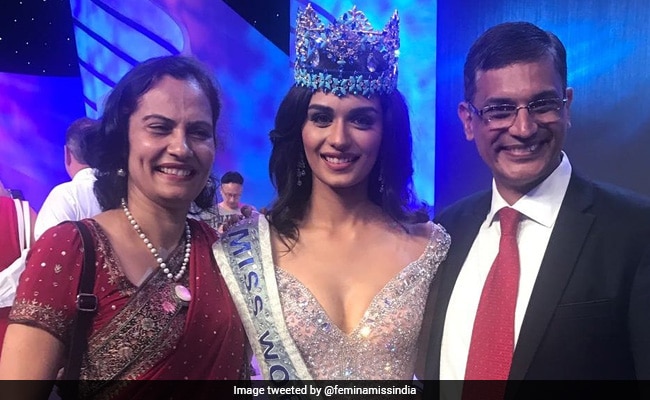 According to Ms Chhillar's profile on the Miss World website, Ms Chhillar aims to be a cardiac surgeon and has plans of opening non-profit hospitals in rural areas.

Ms Chhillar is the sixth Indian woman to win the coveted title of Miss World. Reita Faria was the first Indian woman to claim the title back in 1966, followed by Aishwarya Rai Bachchan in 1994, Diana Hayden in 1997, Yukta Mookhey in 1999 and Priyanka Chopra in 2000.Click for more trending news