Over 5.6 million views for this video. 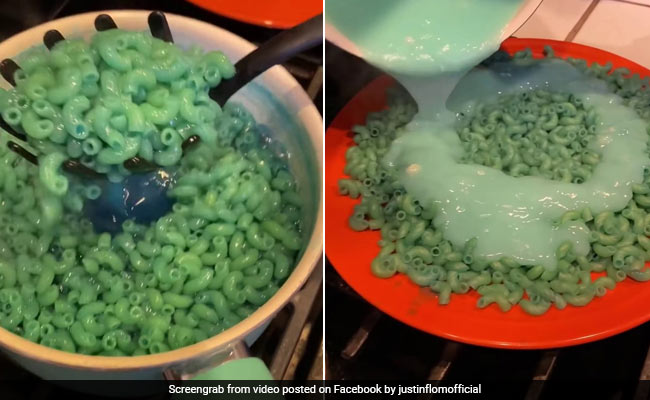 Blue pasta? Here's the dish that has everyone scratching their heads.

In a video that can only be described as bizarre, a man was filmed preparing pasta with an energy drink. The universal popularity of pasta has oftentimes been attributed to its ease of preparation and the myriad ways in which the Italian staple can be cooked. While red and white sauce pasta dishes are fairly common, several countries across the world have their own recipes for preparing pasta - but this is perhaps the first time that the Internet has seen pasta cooked with an energy drink.

American magician Justin Flom shared a video of his friend cooking pasta in a blue-coloured energy drink, leaving it with a bluish hue. Not satisfied with simply cooking the pasta in the energy drink, he goes on to prepare a 'pasta sauce' that incorporates flour with the blue beverage.

"You will never eat pasta the same way AGAIN," wrote Justin Flom while sharing the clip. "My friend Tommy is brilliant! My and my family are gonna try this asap. Wow!"

Intriguing or unappetizing? Watch the video below to decide for yourself:

The video has been viewed a whopping 5.6 million times on Facebook, where it was posted three days ago. In the comments section, many called the dish "disgusting" and "horrendous".

"Well, you're right, I 'will never eat pasta the same way' as you do," wrote one Facebook user.

"The thought of that mess is nauseating. The chunks of flour poured on the pasta was the final straw!" said another.