Simon Davidson said he wrestled with the porbeagle shark for an hour before he was able to reel it in. 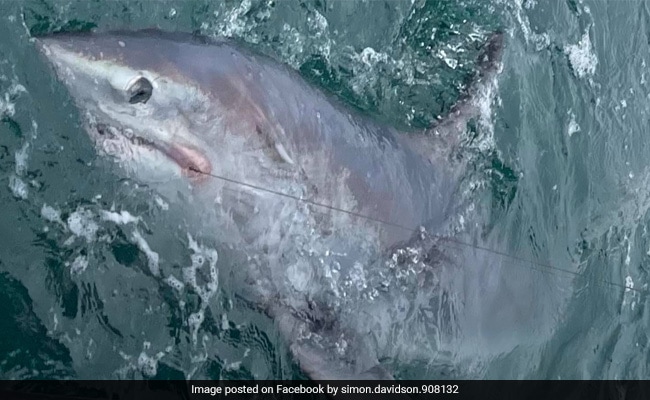 A fisherman is celebrating after catching a record-breaking seven-foot shark off the coast of Devon in the UK. According to Daily Mail, the shark measured almost seven feet long and had a girth of six feet, which makes it the biggest catch ever in British waters.

Simon Davidson said he wrestled with the porbeagle shark for an hour before he was able to reel it in. The big game fisherman, from Northamptonshire, said his body was "battered" after the ordeal, but described it as the "most mind-blowing capture" of his life in a Facebook post.

"I managed to catch a 550lb porbeagle shark. It's totally blown me away, my body is battered, but I am ecstatic," Mr Davidson wrote on Facebook, calling it the catch of a lifetime.

Mr Davidson and six other fishermen worked for over an hour to reel the 'monster' shark into their boat.

Speaking about his record-breaking catch, the fisherman said: "My bait got taken and I didn't think it was a big fish because it hadn't started to fight yet.

"Then I reeled it into the side of the boat and it was a real monster.

"Suddenly it took off through the water and pulled around 600 metres of my line and it was a brutal battle to pull it back in.

"It was an hour of agony. You get to the point where your legs and arms are shaking and you just think your body is going to give up."

Mr Davidson added that it was "terrifying" to think sharks this big were prowling the water.

The shark is estimated to have weighed around 550 lbs or 249 kg. It was released back into water after being measured.

According to Ladbible, the record for the biggest porbeagle shark caught in the UK is held by fisherman Chris Bennett, who caught a 507 lbs (230 kg) specimen in 1993. However, to be considered an official record by the British Records Fish Committee, the fish must be weighed on land - which means it has to be killed. Since most fishermen are unwilling to kill sharks, they measure their catches before releasing them back into water.