Love In Times Of COVID-19: He Saw Her On A Roof, Used Drone To Ask Her Out

"I grabbed my tape, pen, drone, and paper. Then I wrote down my digits and sealed them on my drone," said Jeremy Cohen. 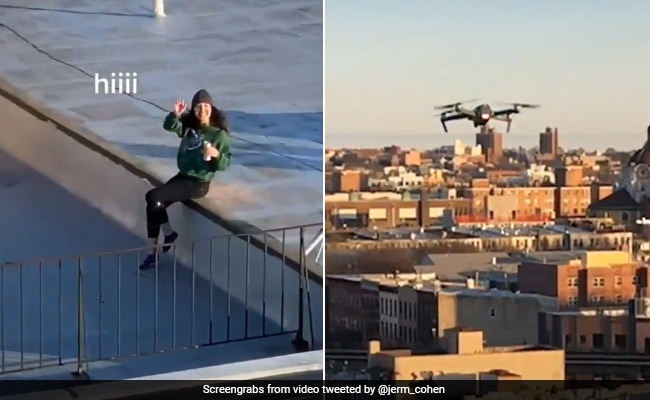 Jeremy Cohen used his drone to ask Tori Cignarella out on a date.

A New York man has broken the Internet after using a drone to get himself a date with a woman on a neighbouring rooftop. Brooklyn-based photographer Jeremy Cohen adhered to health warnings and guidelines about social distancing to contain the spread of coronavirus when he used his drone to send his number to a woman dancing on the roof of the building next to his own.

Mr Cohen told the Bored Panda that he saw the woman - later identified as Tori Cignarella - on her rooftop and waved to her. When she waved back, he sent a drone her way to jump-start the romance.

"I actually haven't been on a date in at least a year. I think I was just craving some social interaction, and being confined by the walls of my apartment inspired some creativity for me," said Mr Cohen.

"I grabbed my tape, pen, drone, and paper. Then I wrote down my digits and sealed them on my drone. Flirting is normally daunting for me, but since I've been quarantined in my apartment for a week now, I was screaming for social interaction."

Luckily, Tori Cignarella responded to his drone message by texting him back - and a 'date' soon followed. For this, keeping in mind their quarantine rules, the two video messaged while sitting on their respective rooftops with identical "organic, microwaved single dinners".

Mr Cohen also documented the interaction in a video that has now gone massively viral on social media. Take a look at it below:

I can't believe this actually worked and yes this is a real story pic.twitter.com/X5KbBl0qIe

Since being shared on Twitter one week ago, the video has collected 6 million views and thousands of impressed comments.

"A Brooklyn love story," wrote one person in the comments section. "A love story brought to you by COVID-19," said another.

"Whether anything romantic pursues out of this or not, at the very least, I've gained a friend," said Ms Cignarella to Time. "Especially because he lives just across the street: I'm really excited to have a nearby friend I can hang out with, once this quarantine is hopefully lifted, very soon."