A video of a monkey being stuck on the front wheel of a bike in Uttar Pradesh's Barabanki has gone viral on social media. 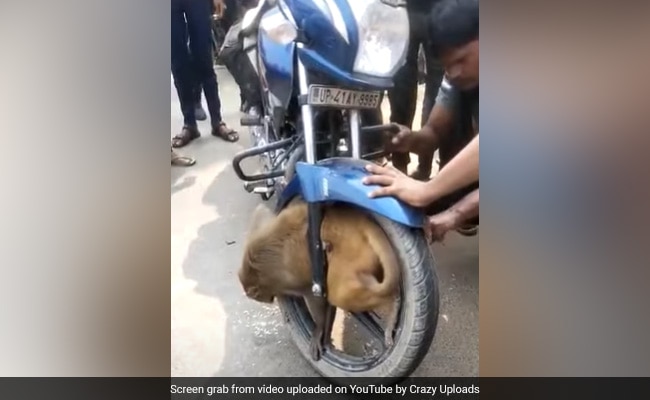 Animals have no voice and at times trouble might find them. As humans equipped with intelligence, saving animals is one of the kindest things that we can do. Videos of people coming together to save the lives of animals who are unable to fend for themselves are often heartwarming to watch. Talking of the same, a frightening video of a monkey being stuck on the front wheel of a bike in Uttar Pradesh's Barabanki has gone viral on social media. However, it has a happy ending.

The incident is believed to have occurred when the monkey attempted to cross the road. However, instead of making it safely to the other side, the animal got caught in the wheel of a speeding bike. Fortunately, the person riding the bike immediately pulled the brakes and the monkey was unharmed.

A video of the incident shows the monkey trapped in the tiny gap between bike's front fork and tyre. The monkey is tangled in between the bike and unable to move even an inch. Seeing the monkey still painfully stuck in the wheel, locals rushed to its aid. There were several attempts to pull the monkey out of the wheel, but to no avail. As people tried to rescue it, the monkey kept still, without making a fuss. A few of them then opened the front wheel of the bike to free the animal as others gathered around.

The video has gone viral, and people were left touched by the heartwarming act and thanked the locals for helping the monkey.