The moment lightning struck the top of the Burj Khalifa in Dubai. 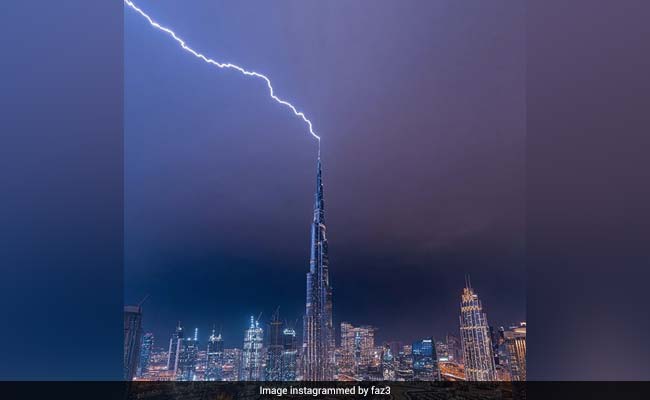 A picture shared by the Crown Prince of Dubai, Sheikh Hamdan.

An unusual rainstorm hit Dubai on Friday evening and continued into the weekend, turning the popular tourist destination into a gloomy and overcast city. Amidst the lashing rains and lightning strikes, a photographer managed to capture on video the moment a bolt of lightning struck the tallest building in the world - the Burj Khalifa.

Zohaib Anjum has spent seven years trying to get the perfect shot, spending entire nights camped outside the Burj Khalifa when rains strike the desert region.

On Friday evening, reports Yahoo News, his dream came true when he caught a fork of lightning striking the top of the 2,720-feet tall skyscraper.

"It was just as though God had planned this moment, the lightning hitting the iconic Burj Khalifa to kick-start my 2020," said the delighted photographer. His extraordinary video shows lightning striking the building and illuminating the sky above.

Mr Anjum was not the only one lucky enough to capture the rare phenomenon on camera. The Crown Prince of Dubai, Sheikh Hamdan, also shared an incredible view of lightning striking the world's tallest building.

According to Gulf News, the UAE is breaking the record for the most amount of rainfall to hit the country since 1996. More thunderstorms and rainfall are expected.

Baby Deer Visits Dog Who Saved It From Drowning. We're Not Crying, You Are