Video: Leopardess Gives Birth To 4 Cubs Inside Hut In Maharashtra

A video shared by by news agency ANI on Twitter shows the mother leopard with her four cubs inside the hut. 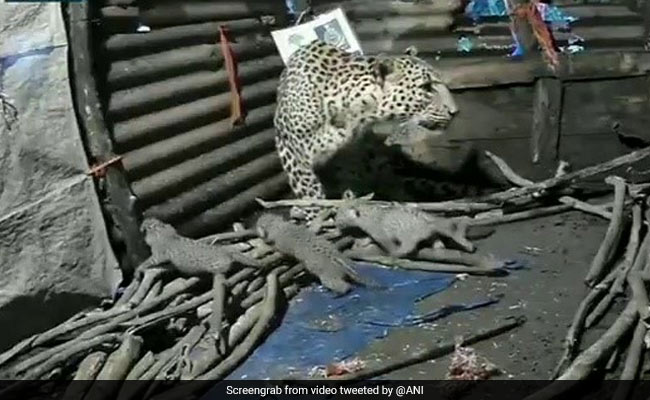 A leopardess gave birth to four cubs inside a hut in Nashik.

A leopardess gave birth to four cubs inside a hut in the Igatpuri area of Nashik, Maharashtra on Tuesday. A video of the tiny cubs has now created a huge buzz on social media. It has also led to a delay in the rescue operation of the big cat, with the forest department now waiting for the leopardess to move the cubs to a different location.

"Female leopard gave birth to four inside a hut in Igatpuri. They are all safe and healthy. We are waiting for the leopardess to take cubs to another place. Due to cubs, we cannot catch the leopardess now," Ganeshrao Jole, Forest Department Officer told ANI.

A video shared by by news agency ANI on Twitter shows the mother leopard with her four cubs inside the hut. Watch it below:

#WATCH Maharashtra: A leopard gave birth to four cubs inside a hut in Igatpuri area of Nashik yesterday. Forest Official says, "all the cubs are healthy and safe." (Video Source: Forest Department) pic.twitter.com/AMA5xXLNHJ

The video has collected over 89,000 views and more than 10,000 'likes' on the microblogging platform. Many Twitter users said the cubs looked adorable, while others expressed concern at the rising instances of human-animal conflict.

Its good to see that all cubs are healthy and safe but at the same time its quite horrifying to see wild animals giving birth in human establishments... it will increase human animal conflicts...

According to the Ranthambore National Park, the Indian Leopard is a vulnerable species listed on the IUCN Red List because of its declining population. Leopards have been targeted by poachers for their hides and other body parts. However, habitat loss, especially due to farming, also poses a threat to them. Habitat loss has also been blamed for increased instances of human-animal conflict.

Tina Ambani's Family Pics Are Worth The Proverbial 1,000 Words