Ivanka Trump Repeats Dress For India Visit. Here's When She Wore It Last 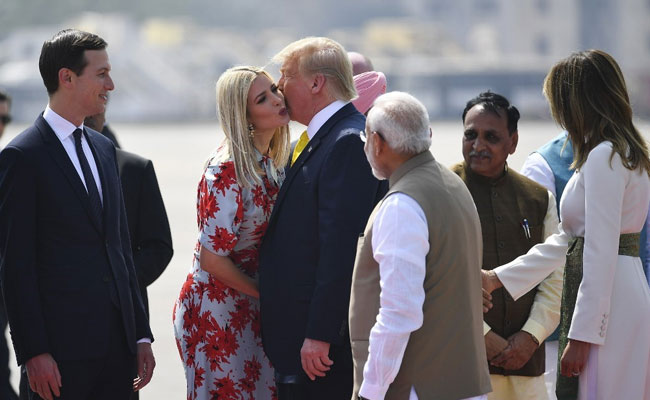 Donald Trump's daughter Ivanka Trump arrived in India on Monday as part of a high-powered delegation accompanying the US President on his first official visit to the country. Ms Trump, 38, stepped out in Ahmedabad this morning dressed in a floral printed baby blue and red dress by Proenza Schouler, a New York-based brand. She paired the summery viscose dress with red pumps.

While her easy breezy sartorial choice was praised by many, it was also significant for another reason. This blue and red dress is the same one that Ivanka Trump, who is also her father's advisor, wore on a diplomatic visit to Argentina last year. To many, the decision to repeat the dress was applause-worthy as the world moves towards sustainability in fashion.

Take a look at a video from her Argentina trip in September last year:

This isn't the first time a celebrity has chosen to repeat outfits and won praise for it. This year, Hollywood actress Jane Fonda repeated her Cannes 2014 outfit by wearing it to the Oscars after declaring that she would not buy new clothes.

British royal Kate Middleton is also known for repeating her outfits. She recently wore a white and gold Alexander McQueen gown that she had first donned in 2012.

Ivanka Trump had visited India two years ago for the Global Entrepreneurial Summit in Hyderabad. She was hosted by Prime Minister Narendra Modi for a gala dinner at Falaknuma Palace in Hyderabad.

After arriving in Ahmedabad this morning, the Trumps flew to Agra to visit the Taj Mahal. They will arrive in Delhi tonight.