Read inOther Languages
This Article is From Oct 21, 2020

In iPhone vs Android Speed Test, The Winner Is...

iPhone vs Android: Over 24 million views for this video 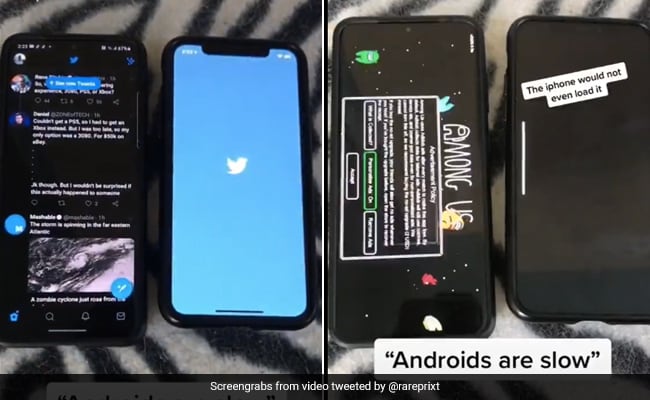 iPhone vs Android: Which phone works faster? Watch the video to find out.

An iPhone vs Android face-off video has reignited the old debate around which phone works better. While there are several companies you can choose from if you want to buy a smartphone, most of them will run on one of two mobile operating systems: iOS (for iPhones) or Android.

Both platforms have amassed their own fan following over the years. While iPhone loyalists claim their phones - manufactured by tech giant Apple - are technically superior and have better cameras, Android fans refute such claims by talking about the advantages of their phones - more functionality and more features for half the cost of an iPhone.

Now, a video that has gone massively viral on Twitter claims to show, in real time, which phone works faster. The video was originally uploaded to TikTok by user '@corylewis04'. In the 33-second clip, an iPhone and an Android smartphone are placed side by side. A user clicks on both of them simultaneously to see on which phone apps open faster.

The user opens a variety of applications - from Twitter and Instagram to the hugely popular mobile game Among Us. In almost all the cases shown in the video, apps load faster on the Android phone.

"Androids will forever be superior," wrote the Twitter user who shared the video on the microblogging platform. Incredibly enough, they used "Twitter for iPhone" to do so - a fact that did not go unnoticed.

Androids will forever be superior pic.twitter.com/osENs3JfbU

The iOS vs Android face-off video has gone massively viral on the microblogging platform, collecting over 24 million views and thousands of comments debating the pros and cons of both platforms.

A number of Apple fans pointed to the superiority of iPhone cameras.

Ok thanks for for showing the speed, but that android camera pic.twitter.com/hwJHduAk4b

"iOS devices are so consistent and the in-app animation and scrolling are so much smoother than Androids," one Twitter user said.

when u will switch from an android to an iPhone, you will see the difference.. ios devices are so consistent and the in app animation and scrolling are so much smoother than androids and in android here and there u will always notice frame drops in apps or in the ui too

Android fans rushed to defend their phones, pointing to the many cons of owning an iPhone

It's so funny watching iphone users get excited over updates when they get stuff androids have had for years???????? pic.twitter.com/liNvp4dBD7

"you will see the difference.."

Yeah i did:
1. Expensive cable that i NEED and dont have
2. Overcomplicated settings.
3. Not many customizable aspects.
4. NO FILE EXPLORER LIKE WTF.
5. No way to install IPA packages easily from your phone.
6. Where is the headphone jack.
7. No.

At least with android you get a charger