On World Yoga Day, many people are posting photos with their families 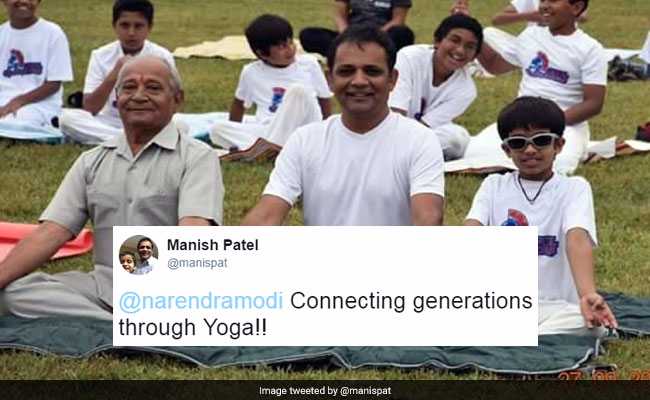 A family practising yoga together on World Yoga Day

With International Yoga Day celebrations on in full swing, Twitter is buzzing with posts and pictures of people participating in events and practising yoga across different parts of the world. Among these pictures, some that stand out show families performing yoga together. During his last 'Mann ki Baat' on May 28, Prime Minister Narendra Modi had appealed to people to share photos showing three generations of a family performing yoga together. "Grandparents, parents and children should together perform yoga and also upload their photos. It will be such a pleasant blend of yesterday, today and tomorrow -- lending a new dimension to yoga," PM Modi said in his radio address. "These pictures will be a guarantee of a brighter tomorrow."

The message touched a chord with many and how. Several people began sharing their photos with family members right after PM Modi's address. With today being International Yoga Day many more families are posting their photos either by tagging PM Modi or using #InternationalYogaDay.

Many people posted their photos before World Yoga Day as well.

3 generations of our family practising yoga..@narendramodi#IYD2017pic.twitter.com/ZaFO2j5faQ

This year PM Modi led the World Yoga Day celebrations at Lucknow's Ambedkar Sabha Sthal. The event was attended by around 50,000 people, including Uttar Pradesh Chief Minister Yogi Adityanath and key ministers of his cabinet.

To mark this day, yoga events have been organised in almost 180 countries across the globe.Click for more trending news