The story of a friendship between two women, that has broken all the barriers, is going viral on the internet. 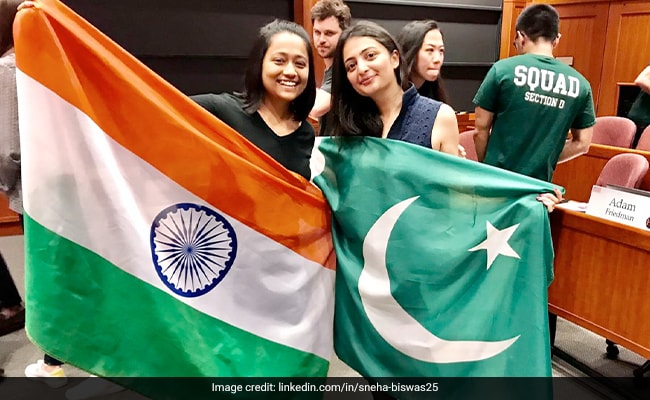 The picture shows both of the women flaunting their national flags on the flag day at Harvard.

The story of a friendship between two women, that has broken all the barriers, is going viral on the internet. It has been shared by Sneha Biswas, the CEO of Early Steps Academy, on LinkedIn. In the post, she talked about one of her classmates from the Harvard Business School who is from Pakistan.

Ms Biswas shared few pictures of her golden time with the woman on LinkedIn two days ago. While sharing the post, she confessed to growing up with stereotypes fostered by the competition between the two countries, which she overcame when she met her friend.

Ms Biswas met her on the first day of Harvard Business School. By the end of the first semester, the woman from Pakistan had become one of her closest friends on campus. Ms Biswas also noted that growing up in a small Indian town confined her knowledge to history books, cricket, and the media during her childhood. Perceptions change when people interact with other people across borders, she said.

"Over multiple chais, biryanis, financial models and case study preps, we got to know each other. Her stories of growing up in a conversative Pakistani backdrop, but blessed with supportive parents who gave her and her younger sister the courage to break the norms and chase their dreams, resonated with me. Her stories of fearless ambitions and bold choices inspired me," she said in the post.

The picture shared by Ms Biswas showed her and the woman from Pakistan flaunting their national flags on the flag day at Harvard.

"Look at us on the famous flag day at #harvard - flaunting our flags and smiling away at the joy of "breaking barriers" - not just literally between India and Pakistan, but also for the countless little girls from India and Pakistan who are scared to shoot for the stars," she added.

The LinkedIn post amassed over 43,000 likes, more than 1,700 comments and hundreds of shares.

"Such a lovely message," wrote a user while another said, "This is what people must know ..before anything else we are humam beings and our nature has different type of characteristic, it depends totaly on us which one we wanna show the society...great going. All the best."

"I Miss It For..": Harsh Goenka's Nostalgic Post About His Birthplace Kolkata