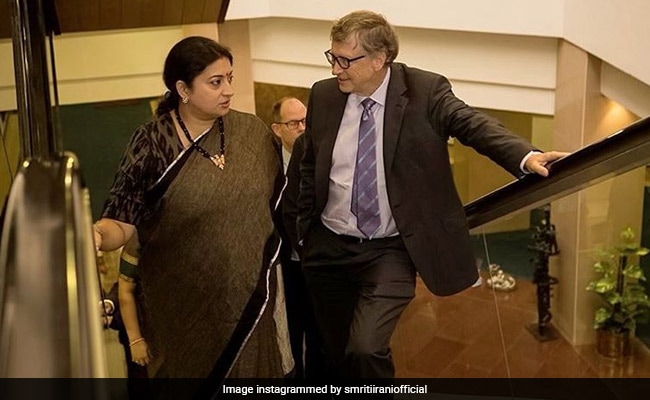 Smriti Irani shared a picture with Bill Gates on Instagram.

Microsoft co-founder and philanthropist Bill Gates, along with Union Minister Smriti Irani, launched the Bharatiya Poshan Krishi Kosh - a repository of diverse crops with the aim of reducing malnutrition - in Delhi on Monday. Ms Irani also shared a picture with Mr Gates on Instagram after the event, and it was the accompanying caption that amused many.

"Soch rahe hain padhai puri kari nahi, aage kya karein (Thinking that we haven't completed our degrees, what to do next)," Ms Irani, 43, captioned the picture, tongue firmly in cheek.

During the 2019 Lok Sabha Elections, Ms Irani had declared to the Election Commission that she is not a graduate. Her poll affidavit mentions "Three year degree course not completed," in brackets.

Bill Gates, of course, is one of the most famous college dropouts in the world today. He dropped out of Harvard after two years to focus on Microsoft - the company that has made him the richest man on earth with a net worth of $110 billion.

Since being shared online last night, the post has collected over 62,000 'likes' and hundreds of comments.

"Hahaha! Unparalleled wit," wrote one person in the comments section. "Caption on point," said another.

Ms Irani is an active Instagram user with 7 lakh followers and often draws praise for her humour.

Bill Gates also met with Bihar Chief Minister Nitish Kumar in Patna on Sunday. "When I'm in Seattle or Washington DC or in London or Paris, that's (climate change) a big topic. But I was impressed in Patna when he (Mr Kumar) said 'we have a problem with climate change' and need to find a way to improve clean water supply..." said Mr Gates after the meeting.