What Nitish Kumar Said That "Impressed" Bill Gates In Patna

"Since you have mentioned the Chief Minister of Bihar, Nitish Kumar, whom I have seen over the last 10 years, he has done a lot of work in Bihar with our Foundation," Bill Gates said 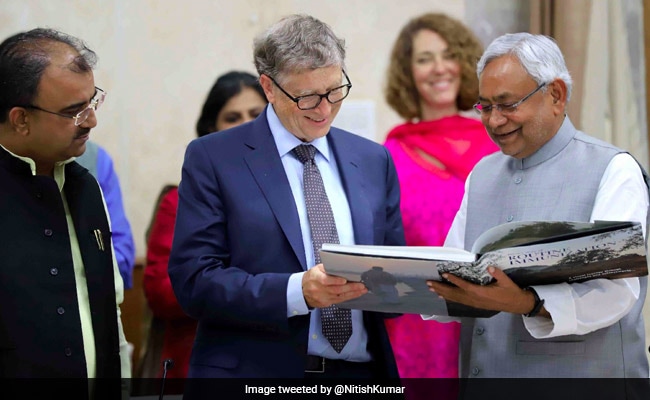 Bill Gates is impressed with Bihar Chief Minister Nitish Kumar and he explained why, a day after meeting with him in Patna on Sunday. The billionaire philanthropist was effusive in his praise for the politician for acknowledging that climate change is the biggest problem the world faces and for his knowledge on the complex problems, especially those in the farm sector, brought by climate change.

"Since you have mentioned the Chief Minister of Bihar, Nitish Kumar, whom I have seen over the last 10 years, he has done a lot of work in Bihar with our Foundation. This was the first meeting I had with him (after a gap of five years) and I didn't expect him to talk about climate change," Mr Gates, the co-owner of the Bill & Melinda Gates Foundation, said at an event in Delhi on Sunday.

"When I'm in Seattle or Washington DC or in London or Paris, that's (climate change) a big topic. But I was impressed in Patna when he (Mr Kumar) said 'we have a problem with climate change' and need to find a way to improve clean water supply..." said Mr Gates, whose Foundation has been working in India on several social welfare projects, including education. He also met with Union Minister Smriti Irani in Delhi.

The state government led by the Janata Dal United chief runs the 'Jal Jeevan Hariyali' programme to recharge natural water sources like wells and ponds and plant trees, all in order to mitigate the ill effects of climate change.

Mr Kumar has fixed a budget of Rs 24,000 crore to be spent over a period of three years. With Mr Gates endorsing his initiatives, the Bihar Chief Minister's project may get a boost. A special session of the Bihar assembly discussed the project in August with participation from all parties.

Bihar officials said the Microsoft founder reviewed schemes for the health department where his foundation is a partner.

"We are pleased with our collaboration with the Bill & Melinda Gates Foundation to improve public health services, community level behaviour change, scaling up innovation across health, nutrition and agriculture," Mr Kumar said after the meeting.

"Bihar is keen to continue its partnership with Gates Foundation to further strengthen sustainable systems across departments like health, social welfare, agriculture..." the Chief Minister said.