"At first, we thought that it had just been wallowing in the mud bath, but then the truth dawned on us: Our wayward zebra had given birth to a zonkey!" 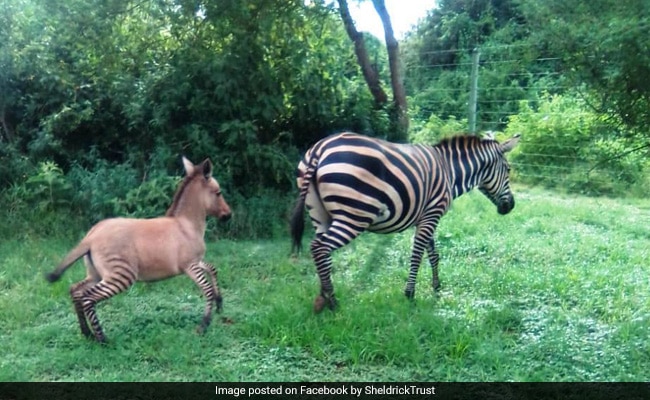 A picture of the zonkey, shared by Sheldrick Wildlife Trust.

The birth of a "highly unusual hybrid" between a zebra and donkey - also known as a zonkey - has delighted social media. Two days ago, Sheldrick Wildlife Trust - an organisation that works to rescue and rehabilitate animals in Kenya - shared the story of the "wayward" zebra and her zonkey on Facebook, where it has gone viral.

In their account of the incident, the Trust explained that in May last year, a stray zebra ventured out of the Tsavo East National Park and soon became an honorary member of a local woman's cattle herd. When the peculiar incident made news, the Trust was called to rehabilitate the wild animal - and it stepped up to the task by transporting the zebra to the Kenze Anti-Poaching Team's base in Chyulu National Park. The amiable zebra quickly made it her home and was often spotted by the anti-poaching team.

"Earlier this year, our fence maintenance team caught a glimpse of the zebra with a tiny foal by her side," the Sheldrick Wildlife Trust wrote. It was only weeks later that the team realised there was a surprising twist to the whole thing as they noticed the foal was "suspiciously light on stripes and overwhelmingly tawny in color."

"At first, we thought that it had just been wallowing in the mud bath, but then the truth dawned on us: Our wayward zebra had given birth to a zonkey!"

The Trust also explained that a zonkey is a "highly unsual hybrid" between a donkey and a zebra. In this particular case, it appears as if the zebra had met an amorous donkey before being relocated.

Photos shared by the Trust show the little zonkey with striped legs running after its mother.

The post about the zonkey has become a viral hit online, collecting over 8,000 'reactions' and hundreds of comments.

"Nature is truly glorious. Glad mom and baby are doing well," wrote one person in the comments section. "That zonkey is just the cutest little thing," said another.

According to Sheldrick Wildlife Trust, the zonkey should be able to lead a normal life but as a mule, it won't be able to successfully breed once it reaches maturity.