"I Was Terrified," Says Woman Who Found Snake Slithering Up Toilet

"I looked and leaned in closer and a snake head slithered up," she said. 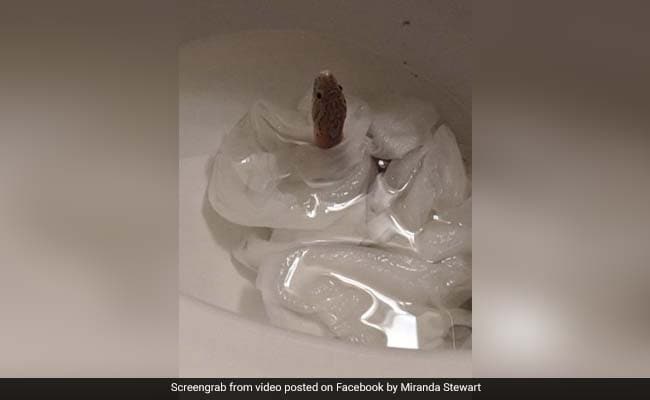 A woman in Colorado found a snake in her toilet.

A woman in Colorado, US, received a rude shock recently when she found a snake in her apartment's toilet. Miranda Stewart, of Fort Collins, made the terrifying discovery last Wednesday and shared details on Facebook, reports news website KDVR.

Ms Stewart said she was using the restroom at her Varsity Apartments home when she found the snake slithering up.

"I used the restroom, like went to flush and everything and it wasn't going down. I looked and leaned in closer and a snake head slithered up. I was terrified," Ms Stewart said. According to Fox News, she screamed for her boyfriend to call the apartment's maintenance man to capture the snake.

Ms Stewart posted photos of her apartment's maintenance man extracting the four-foot snake from the toilet on Facebook, writing: "I've never been so scared in my life".

Wesley Sanford, the apartment's maintenance man, said that it took him nearly 40 minutes to coax the snake out of the commode. He was forced to take the entire toilet apart to force the snake out, which was coiled up at the back.

"We're thinking it was a possible pet from one of the tenants from our apartment complex. If the snake got in their toilet and slithered to ours," Ms Stewart said.

The non-venomous corn snake has now been adopted by Mr Sanford and named "Boots".

"I took him home and my wife was very happy with me and we named him Boots. He's our little guard snake on the property," Mr Sanford said.