"I Floated Inside": Man Returns To Site Of UFO 'Abduction'

"I heard a kind of zipping sound. I looked up and saw a blue flashing light... We saw a 30-foot-long object with a little dome on top." 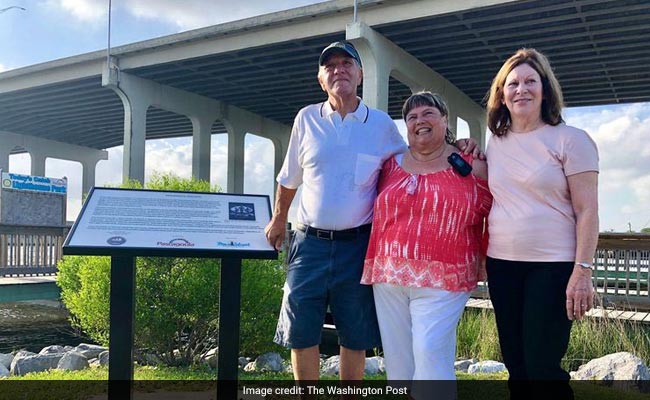 What is certain about the night of Oct. 11, 1973, is this: When Charles Hickson and Calvin Parker Jr. arrived at the sheriff's department in Pascagoula, Mississippi, they were frantic. They told authorities they had just been abducted by aliens. Each had a puncture wound in one arm. Police tried to catch them in a lie, but it didn't work. Both men later passed polygraph tests.

On Saturday, the river bank where the men said the close encounter happened got a historical marker, calling it one of the "best documented" cases of alien abduction. After decades of avoiding media attention, Parker was there for the dedication. Hickson died in 2011.

In 1973, Hickson was Parker's foreman at a shipyard. The two had gone fishing after work at an abandoned boat launch and were still there after the sun went down.

"I was just getting ready to get some more bait," Hickson told The Washington Post in 1975, "when I heard a kind of zipping sound. I looked up and saw a blue flashing light. Calvin turned around too. We saw a 30-foot-long object with a little dome on top."

As it hovered just above the ground, three small creatures emerged, also hovering, he said. The men were suddenly paralyzed. The creatures grabbed them with pincer-type claws and pulled them toward the object, he said.

"I floated inside," Parker told the Biloxi Sun Herald in 2018.

Hickson said they were subjected to a physical examination by something that looked like a "big eye," a constant mechanical sound buzzing the whole time.

And then, they were dropped off, right back in the dark delta where they started. Hickson found Parker standing up, arms raised to the sky and screaming, he told The Post. They ran for help.

At first, sheriff's investigators thought the men had just been drunk. Or lying. After interviewing the men, they left the room with a recorder secretly taping, hoping to catch the pair dropping the act once they left.

But they didn't. They kept on talking about what they had seen and how scared they were.

"We did everything we knew to try to break their stories," Jackson County Sheriff's Capt. Glen Ryder told The Post in 1975. "If they were lying to me, they should be in Hollywood."

Overnight, it was national news. There were news conferences and cameras thrust in their still-stunned faces. A "UFO investigator" from Northwestern University flew down and said their story checked out. Skeptics called them liars, or said Hickson had had an episode of sleep paralysis with hypnagogic hallucinations, while Parker was just "highly suggestible." Believers flooded into Pascagoula by the thousands, wrapped in aluminum foil and sitting all night on the hoods of their cars, waiting for visitors from another world.

Hickson was 42 at the time, and was well-known in the community; so perhaps he felt more able to handle the media crush. He recounted the experience to anyone who would listen. He went on Johnny Carson and Dick Cavett. He published a book in 1983.

Parker, on the other hand, was 18 or 19 when it happened. He had just arrived in Pascagoula from an even smaller town, and had planned to earn some extra money before returning home to get married. He told the media he had passed out at the beginning of the whole affair and couldn't remember what happened.

That was the only lie he told, he said to the Sun Herald in 2018. In fact, he did remember what happened, and was so afraid that aliens had infected him with something that when he got home from the sheriff's department he took a bath in bleach. Within a few weeks, he skipped town. He got married and picked up work in oil fields. If someone at a job recognized him, he would quit.

If Hickson was trying to get rich from the story, it didn't work. Parker told the Sun Herald that before Hickson's death in 2011, he occasionally paid the older man's electric bill.

Parker, now in his 60s, slowly came out of hiding in recent years, and in 2018, published a book of his own.

In March, as the city was discussing plans for the marker, new witnesses emerged, telling the Mississippi Clarion-Ledger that on the night in question, they saw an unidentified flying object with flashing blue lights going up and down the Pascagoula River. They said they kept it secret all these years because they were afraid of people's reactions.

One of them, Maria Blair, told the Clarion-Ledger: "The story is very true. That's what has bothered me for 45 years. It's been on my mind for 45 years."