How One Of Nature's Grossest Creatures Could Help Save Someone's Life 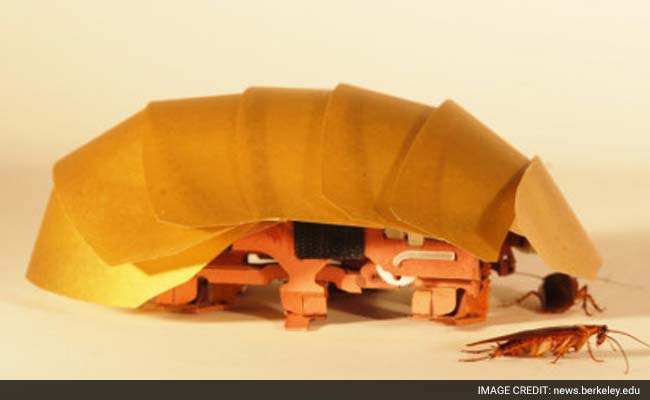 The CRAM robot, inspired by cockroaches, can crawl even when squashed to half its size.

Robert Full doesn't like cockroaches. Probably for the same reasons as the rest of us: they're slick and they skitter, they have those shiny exoskeletons, they're practically impossible to kill.

Nevertheless, Full has devoted countless hours to analyzing cockroaches intently, trying to figure out exactly how they do what they do.

The reason Full, a biomechanics expert at the University of California, Berkeley, put himself through all that was published on this week in the Proceedings of the National Academy of Sciences: It's a paper in which he and a colleague argue that cockroaches, with their soft bodies, resilient shells and nimble creepy-crawling, are an ideal model for a search-and-rescue robot.

"We are not entomologists," - insect experts - "we also think they're disgusting," Full assured Wired. "But they can teach us bigger principles."

For example, a cockroach, with its tough outer shell is capable of surviving foot stomps, magazine swats, the (potential) human-induced garbage apocalypse and accidentally getting rolled over by a robot. How is it also capable of navigating tight, cramped spaces at relatively swift speeds?

Full and his co-author, Kaushik Jayaram, gathered up a bunch of American cockroaches (Periplaneta americana) - "the one you think you don't have in your house, but you do," as Full put it to the Los Angeles Times - and then squeezed them through a series of ever-increasingly small tunnels. Even in the smallest tunnel, which was only 4 millimeters high, the roaches zipped through at essentially the same speed.

The secret is in the exoskeleton - the overlapping chitin plates that encase the bug's body. Full and his co-author found that a cockroach is capable of collapsing its exoskeleton down to a quarter of its normal height, according to the Associated Press. The transformation takes less than a second, and the bug barely needs to slow down to do it.

Thus flattened, the roach maneuvers through a tight space using a form of locomotion the researchers dubbed "body-friction legged crawling," using their legs and belly to push forward. Speaking to Wired, Full compared it a cross between the way sand-swimming lizards move through sand and the way baby sea turtles use their flippers to push across a beach.

The American cockroach can travel the same distance as 50 lengths of its own body in a second - the equivalent of a human running more than 140 mph, Full told the Associated Press. Even compressed, when the cockroach slows to 20 body lengths per second, it's still going pretty fast.

(No roaches were harmed in the making of this study, the LA Times noted. All of the insects moved normally after the pressure was removed.)

Past research on biomimetics - using mechanisms from nature to solve complex human problems - has often focused on soft-bodied animals like worms and slugs as examples of animals able to get into tight places, according to the AP. But Full believes that hard-shelled arthropods like roaches are actually a better model. Not only can they squish themselves down when needed, but they also have legs and wings, can reach higher speeds and are far more crush-resistant than a slimy slug.

On the "ick" scale, though, the slug might be able to give the cockroach a run for its money. But disgustingness is not the contest here.

Full and Jayaram have already built a prototype of their roach-inspired robot, which they believe can one day be equipped with sensors and sent into debris piles, toppled buildings and collapsed mines to search for buried people. Made of a flexible plastic exoskeleton with legs that splay out in tight spaces, the robot can navigate cracks and crevasses just like real roaches do, according to the Los Angeles Times.

The researchers call their creation "Compressible Robot with Articulated Mechanisms," or CRAM. According to the AP, it's about the size of a palm and costs just $100 to make. Jayaram, a Harvard robotics researcher, said he built the critter using off-the-shelf electronics and motors, cardboard, polyester and some knowledge of origami; it would probably take him just 30 minutes to put one together.

Robin Murphy, director of the Center for Robot-Assisted Search and Rescue at Texas A&M University who has consulted with Full on his project, told Wired that the cockroach robot is ideal for "pancake collapses" much like the one that occurred in Tainan, Taiwan, on Saturday, killing at least 39 people and trapping scores more inside the wrecked condominium complex.

"It's not like the Darpa robotics challenges where you go down a hall, down stairs, skip over some rubble. No, no, no," Murphy said. "You're going into spaces too small for a human or a dog to get into. Or maybe they're on fire."

Full's work is a good first step, he said, though there's a lot more to be done on these CRAM bots - controlling their movement, adding sensors, establishing some way for them to transmit data back to rescue workers - before they can be deployed in a real emergency.

"I think they're really disgusting and really revolting," he told the AP. "But they always tell us something new."