How Many Elephants Can You Count In This Video? Twitter Is Confused

A video shared by WildLense Eco Foundation shows a group of elephants at a watering hole. 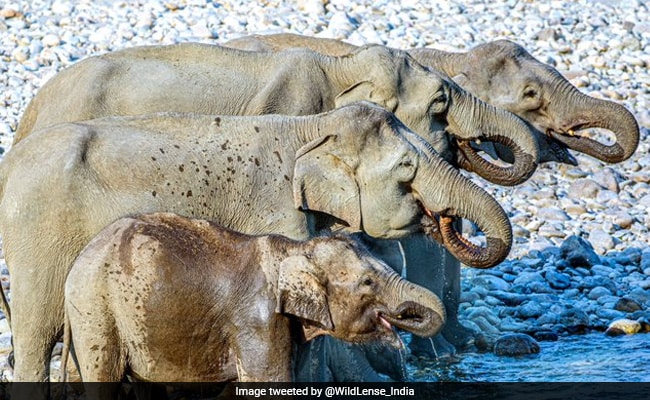 An image shared by WildLense Eco Foundation on Twitter.

The sight of a group of elephants at a watering hole has left many intrigued. A few days ago, WildLense Eco Foundation, a non-governmental organisation, shared a picture that appears to show a group of four elephants standing next to a water body. While the scene is not unusual in itself, for elephants are social animals who live in large groups, it was the claim that there are seven elephants in the picture that left many scratching their heads.

"Some frames are flawlessly awesome, when you get 7in1 frame & that too in a total synchronization," the organisation wrote while sharing the photograph. Take a look at it below:

Some frames are flawlessly awesome, when you get 7in1 frame & that too in a total synchronization. #wildlense@ParveenKaswan@paragenetics@Saket_Badola@rameshpandeyifs@SudhaRamenIFS@dipika_bajpaipic.twitter.com/xmFBPCfaWD

As the picture gained attention with hundreds of 'likes', many questioned the NGO, saying that they could only see four elephants in it. WildLense responded by numbering the elephants and explaining that the seventh one is not visible in the frame.

What am I missing. I could could 4 in this perfect frame

Now, the NGO has shared a video that shows the group moving around and explains how the shot had seven jumbos. "Now watch carefully till the end how this is 7in1 frame," they urged viewers while sharing the clip, where six elephants are clearly visible, but spotting the seventh one might take some effort.

How many elephants can you count in this video? Watch:

Few days back we have posted this image as 7in1 Frame, now watch carefully till the end how this is 7in1 frame. #Elephant Love. #wildlense.@susantananda3@ParveenKaswan@SudhaRamenIFS@Saket_Badolahttps://t.co/rvdXnGohrTpic.twitter.com/sN7Y9ag4me

Since being shared one day ago, the video has collected over 2,500 views and a number of comments.

"Omg this is so amazing! Family picnic," remarked one Twitter user.

"A beautiful sight of the most graceful animals!" another said.

How many elephants could you count? Let us know using the comments section.