She posted pictures of the device on Facebook, asking: "Is this a grenade?" 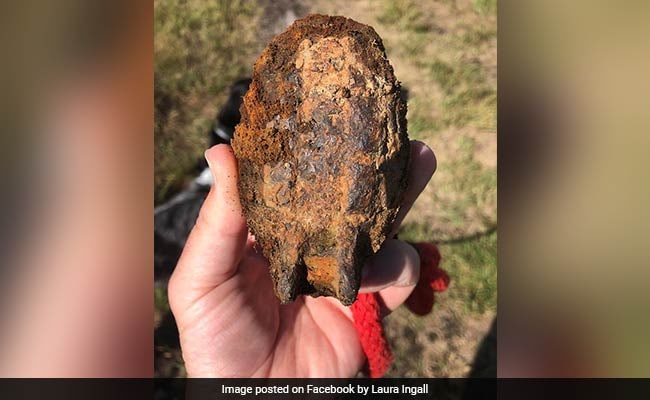 A picture of the grenade was shared by Laura Ingall on Facebook.

A bomb squad was called to a woman's house after she found an old grenade while walking and took it home. The incident took place in Bramshott Common, UK, on Saturday, when Laura Ingall found a partially buried World War II grenade while out walking her dog. Not realising that it could be a live grenade, she kicked it to get it out of the ground and took it home.

"Worryingly, I kind of kicked it to loosen it from the ground - ridiculous looking back," Ms Ingall told BBC.

She then posted a picture of the device on Facebook with the caption: "Is this a grenade?"

According to the BBC, Ms Ingall called the police after she realised that the grenade could be live, reading the comments on her picture.

"It didn't have a pin in it so I thought it was just a shell and not about to explode," she told BBC. However, a police officer who came to her place took pictures of the grenade and called the bomb squad, who said it might be live.

Her house and surrounding houses were later evacuated by police as the bomb disposal squad arrived. Ms Ingall posted a picture of the bomb squad at her home:

However, the bomb disposal teams later confirmed the device was not live. According to BBC, a Ministry of Defence spokesman said: "The inert hand grenade was recovered for reduction to scrap."

The incident does seem to have given Ms Ingall's friends and family a good laugh.

"I think in all the time I've been on Facebook this is my all time favourite post," laughed one person in the comments section. "Have your neighbours forgiven you yet?" another wondered.

Just a month ago, an American tourist found an unexploded World War II shell in Austria and tried to take it home as a souvenir.