He Went To File An FIR. Mumbai Police Surprised Him With A Cake

It was the complainant's birthday. So Mumbai Police filed his FIR, then followed it up with a cake 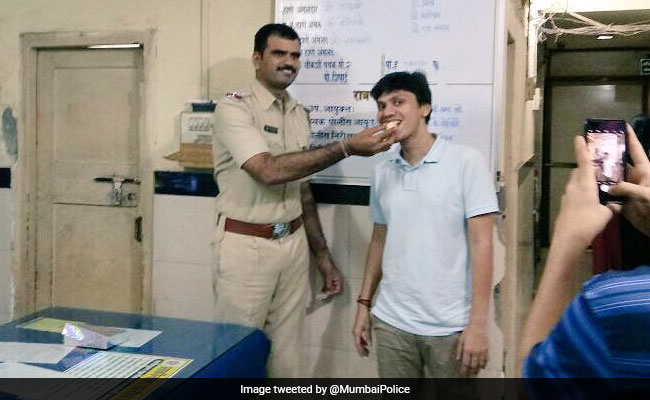 Many have called the little celebration a wonderful gesture.

Everyone knows Mumbai Police's Twitter game is totally on point. But in the midst of their quirky tweets to drive home messages on serious issues, a recent tweet has people calling them the 'tough guys with hearts of gold'. And chances are you'll agree with this term when you find out the reason behind it.

Promoted
Listen to the latest songs, only on JioSaavn.com
A tweet posted some 12 hours before writing this, shows officers celebrating a man's birthday at the Sakinaka Police Station. While filing an FIR, officers at the station realised it was the complainant's birthday. So, once his complaint was registered, everyone celebrated with a cake.

"When personal details in the FIR revealed it's complainant Anish's birthday, a Cake followed the FIR Copy at Sakinaka Pstn," says the tweet. It is accompanied by two pictures that show the celebrations at the police station.

When personal details in the FIR revealed it's complainant Anish's birthday, a Cake followed the FIR Copy at Sakinaka Pstn pic.twitter.com/tEBnNYdJ3y

Since being posted, the tweet has collected over 900 'likes' and more than 200 retweets. Several people have shared their thoughts on the tweet. Many have called the little celebration a wonderful gesture.

We are proud of @MumbaiPolice and it's achievements.
Love you.

Wow very nice this proves mumbai police is the best.#CitizenWeekend#citizenspride

Good Gestures are appreciated by all

Wow..hats off to the great humans at Mumbai police..proud to be protected by such a kind & sensitive force..