"Going To Stay Until He Signs My Movie": The Man On A Mission To Meet Shah Rukh Khan

"In August, when I came across Shahrukh Khan's interview where he said that he hadn't signed any new movies since Zero, I literally went bonkers," Jayanth Seege revealed to 'Humans of Bombay' 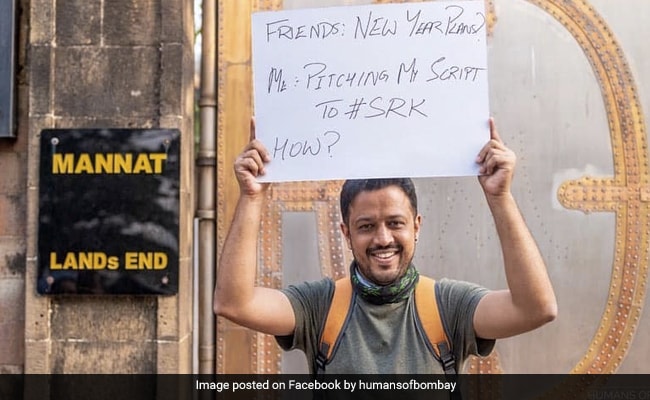 Jayanth Seege is hoping to meet Shah Rukh Khan to pitch a script to him.

"In August, when I came across Shahrukh Khan's interview where he said that he hadn't signed any new movies since Zero, I literally went bonkers," Jayanth Seege revealed to 'Humans of Bombay'. "I was like, 'What if I get SRK to act in my movie?' So, I created a movie poster overnight and tweeted it, tagging SRK."

Obviously nothing happened, but the filmmaker was undeterred. On a whim, he flew to Mumbai from Bengaluru in December in order to narrate the script face to face. Since then, he says, he stood outside the superstar's house every day from sunrise to midnight - to the point where even the security guards have gotten friendly with him.

"Eventually, I realised I had to do something atrociously magnanimous like he does in his movies," says Jayanth. "Here I am. And I'm going to stay put until he signs my movie."

The mission to meet SRK has taken on the name of 'Project X'.

Since December 31, Jayanth has been sharing updates on Twitter while camping outside Mannat, hoping to pitch his script to Shah Rukh Khan.

Friends: New year plans?
Me: I am pitching my script to @iamsrk.

His most recent update is from January 3, where he thanked everyone who posted on his behalf.

Jayanth Seege's grand gesture to catch the superstar's attention has earned him quite a few fans himself.

"I'd definitely watch this movie, not because SRK will be in it but because of this man's resilience! Good luck," wrote one Facebook user.

"Dedication in action right there!!! So awesome!!!" said another.