"Gator is being quite cheeky about it, really," wrote one Twitter user. 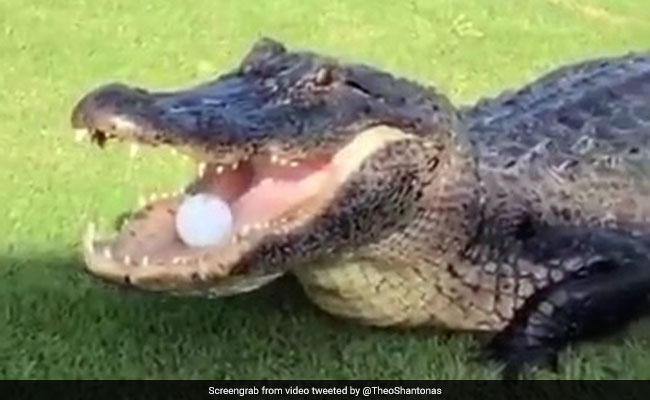 An alligator was filmed stealing a golf ball.

In the American state of Louisiana, alligators are common. In fact, according to the Louisiana Department of Wildlife and Fisheries, the state has the highest alligator population, currently approaching a whopping 2 million. Though alligators are most common in coastal marshes, one recently found its way to a golf course - and left a group of friends stunned by stealing their ball.

A video going viral online shows the alligator joining the group and calmly taking their golf ball in his mouth. Lane Rodrigue told TMZ News that he was playing at the Idlewild Golf Course in Patterson, Louisiana on Monday when the gator walked right up to them and "snatched" their ball.

A video of the encounter shows the reptile with its jaws open, as if daring the golfers to come claim their ball. The video has gone viral on social media- making its way to other platforms like Reddit and Twitter, where it has left viewers amazed. Take a look at it below:

You taking the shot? ???? pic.twitter.com/TaUsspCRUH

Since being posted on Twitter, the video has garnered over 2 lakh views and hundreds of responses.

"Gator is being quite cheeky about it, really. Almost like he's saying 'you mean this ball? Here, come & get it.'" wrote one person in the comments section.

"Correction: it is NOT the golfer's ball any longer," another remarked.

According to news website La 100, neither the golfers nor the alligator were harmed in the encounter - most probably because the players made no attempt to retrieve their ball.