Watch Sansa, Arya and Jon Snow in the crypt of Winterfell 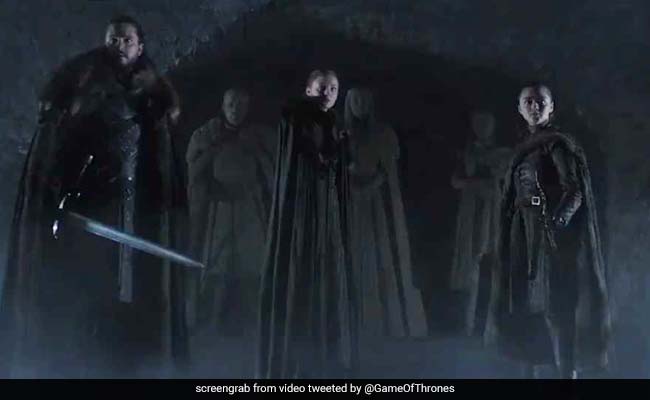 Game of Thrones season 8 will premiere April 14, HBO announced with a teaser on Sunday. The announcement of a release date for the final season of the megahit TV show, along with the enigmatic teaser, has fans super excited.

The teaser, 1 minute and 29 seconds long, shows the underground crypt of Winterfell, with the Stark siblings walking through it. While Sansa, Arya and Jon Snow feature in the short teaser, there is no sign of Bran in his new role as the Three-Eyed Raven. The teaser ends with a chilling shot of the Stark siblings and Jon Snow coming face to face with their own statues, after walking past the statues of their fallen family members.

Excited about the return to Westeros? Take a look at the teaser below:

Since it was released, the short teaser has collected over 4.35 million views and thousands of comments. Reactions to it have even been curated into their own Twitter Moment.

Take a look at what people had to say about the teaser of Game of Thrones season 8:

There must always be a Stark in Winterfell.

game of thrones promos really said give the sansa stark justice warriors everything they want pic.twitter.com/BYHzN3qaCu

question,, who's direwolf is that? #GameOfThronespic.twitter.com/9RjTd6iwUV

Well I'm about to spend the rest of my night reading 50 trailer breakdowns https://t.co/LMHskVO0sQ

The final season of Game of Thrones will have only six episodes - making it the shortest season so far. However, there are rumours that each episode will be an hour and a half long.