If Staying In Is Getting To You, Learn From This Man - Quarantined For 40 Years

"For a long time, I felt lost and helpless," says Rajeev Poddar. "But when we moved houses, I found my life's purpose." 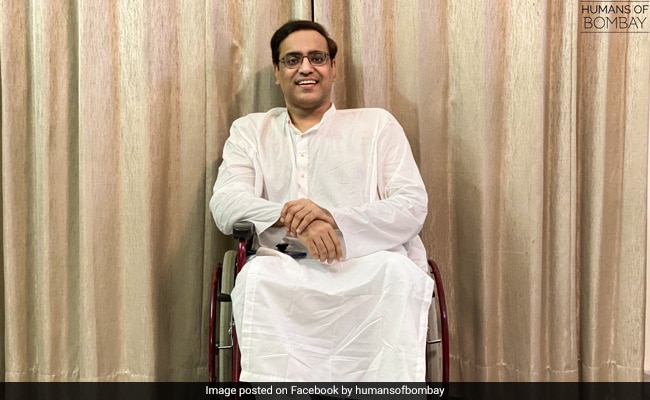 Rajeev Poddar has helped thousands of students with his classes.

Rajeev Poddar was just 9-years-old when he lost the use of his legs due to paralysis. Confined to a wheelchair and unable to sit for more than 30 minutes, he had to drop out of school as his parents ran from pillar to post, trying to find a cure. Nothing was successful, and Mr Poddar's life became - as he puts it - a quarantine that has been ongoing for 40 years.

And yet - despite all the challenges that life put in his way - Mr Poddar decided early on that he would not crib. Instead, he decided to do something with his life - and the direction he took has helped thousands of others. Mr Poddar has now opened up about his extraordinary journey in an interview to 'Humans of Bombay'.

"I couldn't go to school or meet my friends, which got to me, but my family struggled too," he says while talking about the effect that paralysis took not just on him but also on his family. "I knew my treatment was affecting our finances. So at 14, I told myself, 'This is the life you have. You can either crib and make it worse or do something about it.'"

Mr Poddar then began doing the only thing he could - reading. He says he read anything he could lay his hands on, including textbooks borrowed from his friends. However, he still felt helpless, knowing that his friends would complete their education and go on to get jobs - something he wouldn't be able to do.

"For a long time, I felt lost and helpless," says Mr Poddar. "But when we moved houses, I found my life's purpose."

Mr Poddar was 23 at the time, and known as quite the intellectual for all the reading he did, when some kids in his neighbourhood approached him. They wanted him to teach mathematics, as their tuition teacher had not shown up.

"I'd never taught before, but it seemed easy. I added some humor to make it fun and they loved it so much, they asked their tuition teacher to stop coming and asked me to teach- I happily agreed!"

Word of Rajeev Poddar's teaching skills spread around his hometown of Kolkata, and slowly, his batch increased from 10 students to a 100. He says he did not charge his students, earning enough money from trading stocks. Teaching became a passion for Mr Poddar - who later founded 'Knowledge Capsule' to help students with current affairs.

"My students kept me sane!" says Mr Poddar. "I believe that most learning happens through teaching-- and I don't ever want to stop."

Unfortunately, he has had to reduce his batches over the last few years as his health has deteriorated - but that hasn't dampened his enthusiasm for teaching. "Now I create short awareness videos on YouTube on topics like 'Helicopter Money', 'Jio', and even 'Covid-19'," he says to Humans of Bombay.

Mr Poddar concluded his interview on a note of hope amid the coronavirus pandemic, saying: "Lately, I've been hearing a lot about how difficult it's been for everyone to be caged at home.

"But, take it from someone who's always been 'quarantined'- if I could come so far from within the 4 walls of my home, imagine how far you'll go once you're out. Stay strong."

You can read his interview below:

Since being shared online on Thursday, the post has collected over 42,000 'likes' and more than 6,000 'shares' on Facebook, along with thousands of comments.

"Absolutely a marvellous person, huge respect for you," wrote one person in the comments section.

"Lucky that I have also been one of his students! Truly Rajeev sir is an inspiration," another said.