Since being shared Thursday, the rare blue lobster video has amassed over 1 million views with 65,100 likes, 5,623 retweets and several likes. 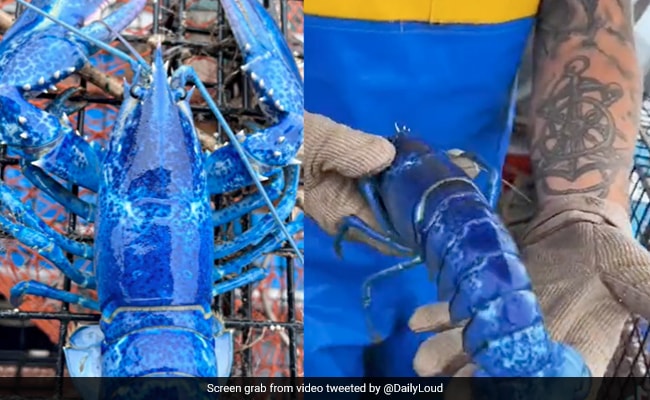 Blue Lobsters are one in 2 millions

A video has surfaced on the internet of an incredibly rare blue lobster caught by a fisherman in the United States. The Maine fisherman called the crustacean the “prettiest blue and white ever seen”, according to the clip that was first posted on TikTok and later appeared on other social media platforms. Newsweek reported that Blake Haass, the fisherman, shared two clips of his incredible catch. In one of the videos, Mr Haass can be seen talking about the blue lobster and how rare it is. “Check out what we just caught in this trap, we got a blue lobster. I looked it up it's 1 in 2 million, of how rare these are.”

The video was also shared widely on Twitter. Since being shared Thursday, the rare blue lobster video has amassed over 1 million views with 65,100 likes, 5,623 retweets and several likes.

In an interaction with Newsweek Mr Haass said, "I have never seen a blue lobster this bright of a blue or as pretty. We might see a lobster once in a while with a slight tint of blue on a claw or tail maybe but that's it. This is the first one I have ever seen this blue all over! And such a beautiful blue.”

"I hope I find another blue lobster again but they are so rare you only hear of one being caught once in a great while across the state of Maine," he added.

He told the news portal that the lobster was about 10 years old and he said it was rare to find and Mr Haass wanted to release it back to the ocean. Mr Haass feels lucky to have caught a blue lobster.

Twitter users left several comments on the post. One of them read, “Lobsters THAT BLUE are rare, a 1 in 2 million find. Natural lobster colours aren't like that.” Another user wrote, “It's a really beautiful colour blue that. It looks like it's been carefully painted.”