Videos of the zebra taking over the streets of the Paris suburb have generated much amusement on social media. 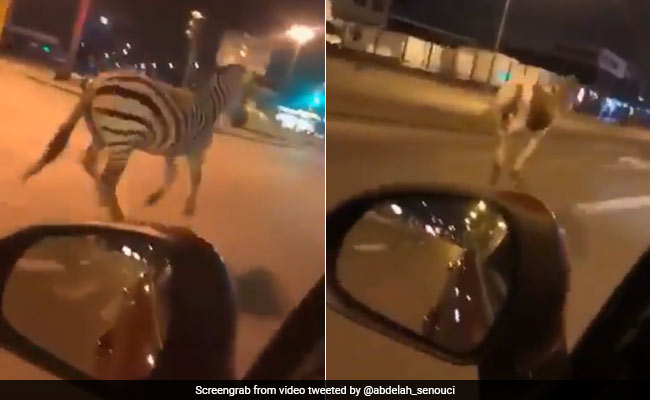 A zebra and two horses were spotted running on the streets of a Paris suburb.

Residents of a Paris suburb were recently surprised to see a zebra and two horses running loose on the streets of the town. Videos going viral on social media show the animals cantering on the streets alongside cars as spectators look on in amazement and confusion. The incident occurred when the animals managed to escape from their circus and decided to explore the neighbourhood.

The trio, according to Huffington Post, escaped from a circus in the town of Ormesson-sur-Marne and made its way to the neighbouring town of Champigny-sur-Marne on the outskirts of the French capital. The owner of Badin Circus, from where the zebra and the horses escaped, told the news outlet that the animals are tame and did not wander too far from the circus.

Videos of the zebra taking over the streets of the Paris suburb have generated much amusement on social media. One video, which has collected over 2 lakh views on Twitter, shows the zebra and the two horses running alongside moving traffic.

Another, which has garnered over 10,000 views on the microblogging platform, shows vehicles slowing down for the animals, who are seen running happily.

"The animals live in a park by day, then in their trailer at night," said Mr Moulot, the owner of the circus, adding that they escaped when their enclosure was left unlocked. He said that the animals were on the loose only for about 15 minutes before they were recaptured.

In 2017, an elephant escaped from its circus in Wisconsin, US, and wandered around the city looking for a snack.