Emraan Hashmi's Son is Sending Out These Adorable Thank You Cards 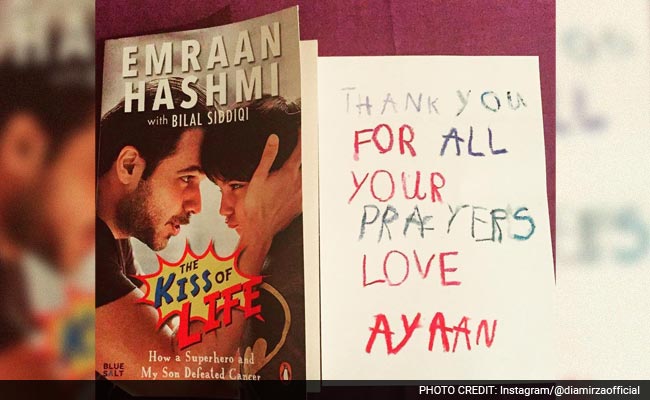 Many celebrities have taken to Twitter to post the special cards sent to them along with Emraan's book.

Even as the world is showering praise on actor Emraan Hashmi for his new book and the freshly released trailer of Azhar, there's another Hashmi who's taking over social media for the most adorable reason possible. This Hashmi in question is none other than the Jannat actor's six-year-old son Ayaan.

The tiny tot, who has successfully overcome his battle with cancer, is now sending out the sweetest thank you cards, thanking people for their prayers and good wishes for him. Many celebrities have taken to Twitter to post the special cards sent to them along with Emraan's book The Kiss of Life: How A Superhero and My Son Defeated Cancer.

The book, authored by the Dirty Picture actor details his and his wife's struggle after their son was diagnosed with the illness back in 2014.

Farhan Akhtar, Sonali Bendre, Prachi Desai, Dia Mirza are some of the stars who've tweeted pictures of the special card sent by Ayaan. Take a look below:

I love you Ayu you are my favourite superhero. #TheKissOfLife @therealemraan Thank you for this precious book

I'm speechless! Such a sweet note by Ayaan ... Lots of love to you! Thank you @emraanhashmi for this. God bless u pic.twitter.com/2HFc7wqAnt

This just brought the biggest smile to my face ! Love :)))) @emraanhashmipic.twitter.com/W6EeMZrZsv

Thank you @emraanhashmi for sending across this wonderful book #TheKissOfLife. A story of courage and optimism. pic.twitter.com/bqG7nli4nP