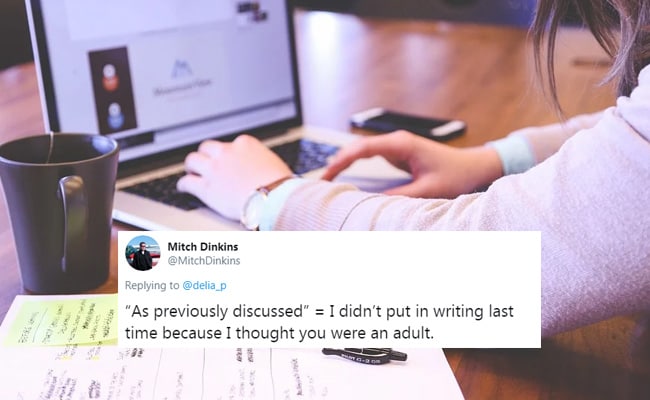 Twitter thread that decodes what employees say vs what they actually mean in emails.

Have you ever masked your exasperation under a veil of pleasant, professional politeness while responding to an email at work? If the answer is yes, you will probably relate to - and love - this viral Twitter thread that decodes what employees say vs what they actually mean in emails.

Twitter user Delia Paunescu kicked off the thread by sharing her favourite example of corporate jargon. "'I'm a little confused' is by far my favorite - it's absolute rage masked as a professional pleasantry," she wrote, asking Twitter users to share their own favourite "insufferable work gibberish phrases".

i've recently become obsessed with all the insane corporate ways we say normal things to each other.

"I'm a little confused" is by far my favorite - it's absolute rage masked as a professional pleasantry.

what are some of your best/most insufferable work gibberish phrases?

Her hilarious tweet has collected over 94,000 'likes' and hundreds of responses from people who admitted that their own professional emails are often passive aggressive.

Take a look at some of the funniest tweets from employees and working professionals revealing what they say and what they actually mean:

“I'm sorry; I think my email/statement probably wasn't clear. Hopefully this helps” = you're either stupid or deliberately ignored what I said/asked.

What "Can I ask a clarifying question?" actually means

“Can I ask a clarifying question?” (Read: if you can't organize your thoughts, I will.)

"As previously discussed" is one of the most common phrases used in emails. Do you agree with this interpretation?

“As previously discussed” = I didn't put in writing last time because I thought you were an adult.

"Thank you for your feedback! I'll be sure to keep it in mind!" <- your criticism is completely irrelevant if not flat out wrong and you know less on the topic than the back end of a donkey, but I have to pretend like I at least considered your opinion.

"While I understand your urgency..."

"While I understand your urgency..."
=
"Procrastination on your part does not constitute an emergency on my part."

A number of people admitted to using this phrase

Stealing from somewhere but it's true: “I hope this helps!”=never ask me for anything ever again

Translation: Leave me out of this

How many of these phrases have you used? Let us know using the comments section.