Dubai Crown Prince Cordons Off Mercedes After Birds Build Nest On It. Watch

The Crown Prince of Dubai has shared a video which shows birds nesting on his Mercedes-AMG G63 SUV. 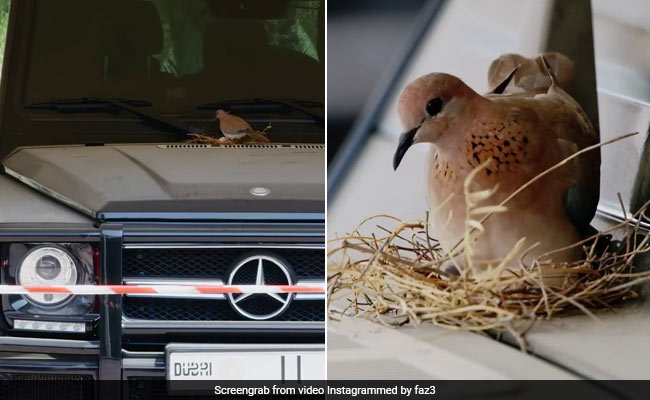 Screengrabs from a video shared by the Crown Prince of Dubai.

The Crown Prince of Dubai has earned praise for refusing to use his Mercedes after spotting a bird's nest on it. Sheikh Hamdan Bin Mohammed Bin Rashid Al Maktoum is a nature lover, according to Esquire, and his reputation as an environmentalist was further boosted by his decision to cordon off his Mercedes-AMG G63 SUV.

According to Khaleej Times, Sheikh Hamdan had recently posted an Instagram story which showed his Mercedes cordoned off with red and white tape inside his Dubai residence. He reportedly also told his staff to stay away from the area so as not to disturb the bird. The video, filmed from a distance, showed the bird sitting on her nest on the SUV's windshield.

On Wednesday, the Crown Prince of Dubai, who is popularly known as Fazza, took to Instagram again with an update for his 10 million followers. This time, he shared a video showing the chicks that hatched from the eggs. "Sometimes the little things in life are more than enough," he wrote while sharing the clip, which shows the mama bird taking care of her babies on top of the luxury vehicle.

The video has gone viral on Instagram, collecting a whopping 1.5 million views in less than 24 hours. Many Instagram users were delighted with the video and praised Sheikh Hamdan.

"I really appreciate your kindness," said another, while a third added: "Lucky bird".

"Not Associated With Them": Virender Sehwag Flags Unauthorised NFT