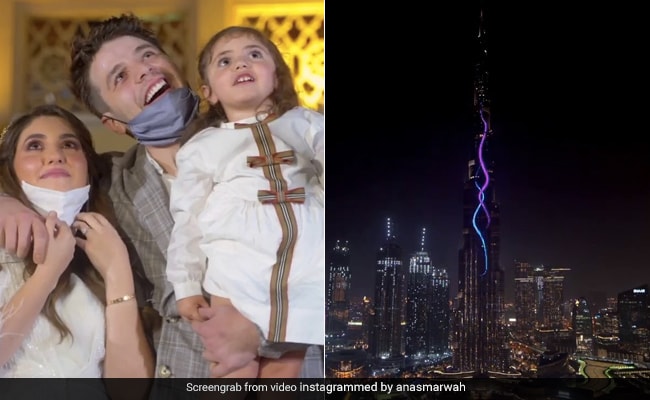 Anas and Asala Marwah lit up the Burj Khalifa for their gender reveal party.

This stunt took gender reveal parties to new heights - pretty literally. UAE-based Syrian influencers Anas and Asala Marwah on Tuesday hosted a gender reveal party at one of the world's tallest buildings. The couple decided to project the gender of their second child onto the iconic Burj Khalifa in Dubai in an event that has gone viral on social media.

Gender reveal parties are not new - they were popularised in the late 2000s. Instances of expecting couples getting creative to reveal the gender of their unborn baby to friends and family have, however, long invited scrutiny and criticism. Some say the parties are an unnecessary display of wealth, while others criticise them for stunts which can be potentially dangerous.

Anas and Asala Marwah have a following of over 7 million on their YouTube channel 'The Anasala Family'. The couple had the words "It's a boy" projected onto the Burj Khalifa in a stunt that cost them over $100,000, reports Perth Now. A video that the social media stars shared on YouTube two days ago shows the tower light up in blue after a dramatic countdown.

On Instagram, their gender reveal has been viewed 1.7 million times.

Reactions to their gender reveal video have been huge - but not all the reactions have been positive. While the video garnered over 15 million views on YouTube, many criticised the couple for the lavish gender reveal event.

Syrians are displaced internally, displaced externally, in squalid camps and under trees, hungry, in need of aid, food, baby milk and medical supplies and treatment and the son of former Syrian Coalition member spends $95,000 on a gender reveal party. Disgustingly shameful. https://t.co/r1aXZkyoUk

Someone did a gender reveal on the Burj Khalifa in Dubai. Cost 350 grand or so they say. Gammiest looking thing I've ever seen. pic.twitter.com/Z93GpNMWRJ

According to the Middle East Monitor, it is not clear whether the couple paid for the event themselves or if it was part of a promotional deal with the city.