No it wasn't Miss Colombia: Livestock Version, but it could have been.

A donkey disguised as a flirty farmgirl took home a quirky Colombian contest's top prize Sunday, without even making an ass of herself.

No it wasn't Miss Colombia: Livestock Version, but it could have been.

With some obvious love for their farm animals, the people of the central town of Moniquira have been letting their donkeys shine this way for 14 years at the annual donkey festival.

It wouldn't be a party without donkey races, contests to see which is the most elegant, and the costume contest.

With her garish print dress with snails embroidered on it, long blonde hair and bushy eyebrows, Amasijos, from the town of Arcabuco, captured the most hearts, and outdid 59 other contestants, most of whom wished for world peace. 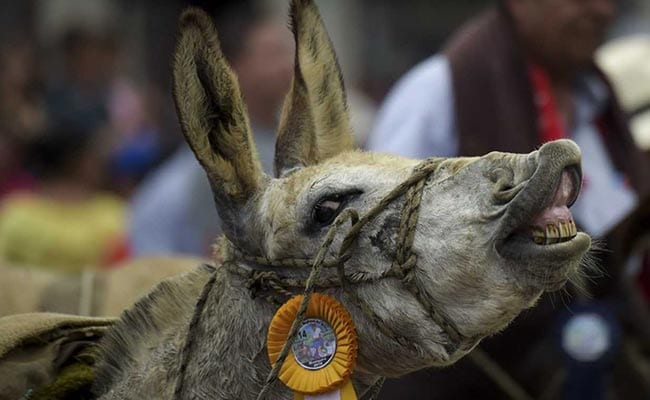 Donkeys traditionally have been beloved everyday workmates in mountainous and largely rural Colombia. Although they have been increasingly replaced by trucks, they still have a special place in Colombians' hearts.

"The important thing is the participation of farmers, who are often not taken into account because of their way of life, here it is important," Alvaro Lopez, the proud owner of Amasijos, told AFP.

Promoted
Listen to the latest songs, only on JioSaavn.com
For the win, Lopez had to beat other donkey owners who dressed their animals with indigenous feathers and necklaces, or with shirts of the Colombian national team, which on Tuesday will face England in the second round of the World Cup.