The US President tweeted that he is 'like, really smart' and 'a very stable genius'. Jokes poured in. 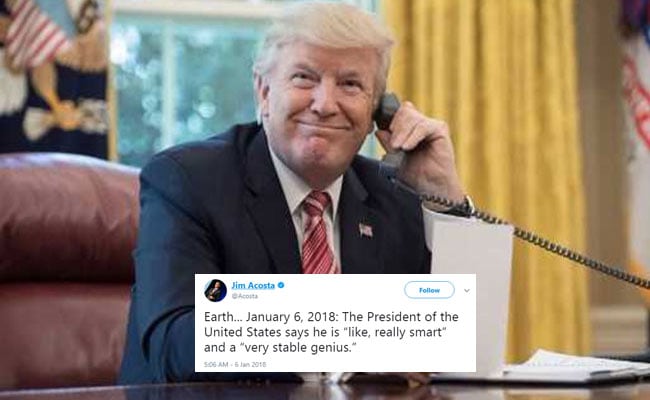 Donald Trump hit back at suggestions about his mental health in a series of tweets.

In a series of tweets yesterday, US President Donald Trump hit back at suggestions that he is mentally unfit for office by declaring that he is, in fact, 'like, really smart' and 'a very stable genius'. Reacting to questions surrounding his mental health, Mr Trump accused his opponents of trying to score political points. "Actually, throughout my life, my two greatest assets have been mental stability and being, like, really smart..." tweeted the US President. "I think that would qualify as not smart, but genius....and a very stable genius at that!" he added in his next tweet.

Now that Russian collusion, after one year of intense study, has proven to be a total hoax on the American public, the Democrats and their lapdogs, the Fake News Mainstream Media, are taking out the old Ronald Reagan playbook and screaming mental stability and intelligence.....

....Actually, throughout my life, my two greatest assets have been mental stability and being, like, really smart. Crooked Hillary Clinton also played these cards very hard and, as everyone knows, went down in flames. I went from VERY successful businessman, to top T.V. Star.....

....to President of the United States (on my first try). I think that would qualify as not smart, but genius....and a very stable genius at that!

His defense of his mental faculties, extraordinary by even his standards, was soon being trolled on the micro blogging platform. As the hashtag 'stable genius' trended in the US, jokes began to pour in:

Q: Education?
A: I went to the best colleges, or college.

Q: Grades?
A: I had a situation where I was a very excellent student.

Q: Your greatest assets?
A: Mental stability and being, like, really smart.

Is it just me who read the 'being, like, really smart..' bit in Gretchen Wiener's voice from Mean Girls? https://t.co/2ICyp07jUg

I'm just going to let this video speak for itself.

Earth... January 6, 2018: The President of the United States says he is "like, really smart" and a "very stable genius."

Mr Trump's tweets came after suggestions about his mental capabilities in a new book - Fire and Fury: Inside the Trump White House by Michael Wolff.