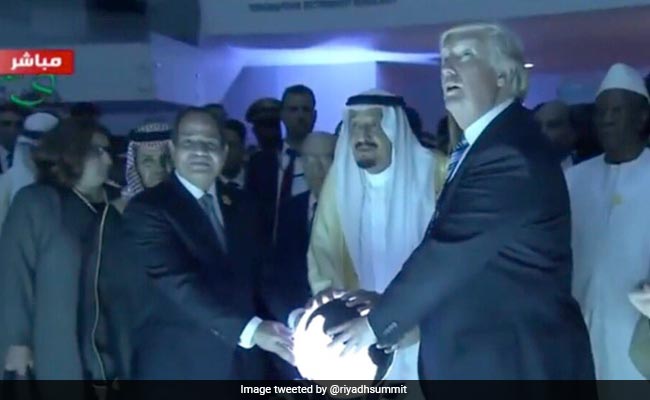 New Delhi: During his first presidential trip abroad, US President Donald Trump inaugurated Saudi Arabia's new Global Centre for Combating Extremist Ideology on Sunday. One particular moment from that event, however, stands out. It's a moment when Mr Trump, along with Saudi Arabia's King Salman and Egypt's President Abdel Fattah el-Sisi, have their hands placed on a glowing orb while standing in a vast, dark hall. According to local media, the the leaders placed their hands on the illuminated globe and "officially activated the centre and launched a splashy welcome video."

However, the striking moment instantly became a meme and flooded social media early this morning.

There were plenty of The Lord of the Rings references:

not all the palantiri were accounted for when Numenor was corrupted by Sauron and lost so it's always nice to see one come back into play pic.twitter.com/hBY2DDSmSs

As well as some Harry Potter ones:

seriously though... this "Harry Potter and the Order of the Phoenix" reboot is terrible pic.twitter.com/YspKvCm4g4

And some Star Wars ones as well:

@cd_hooks it's totally the Orb of Peace from the end of The Phantom Menace pic.twitter.com/KuBEIfKWdY

tfw you and your friends unearth an ancient alien hell orb and combine your powers inside it to stop superman >>>>> pic.twitter.com/kzsYEKC4R0

just some billionaires gathering in the dark and holding a glowing orb. probably fine

Everyone freaking out, it's a GLOBE
You can see the continents
Just a conclave of powerful men laying hands on a fiery globe
This is normal pic.twitter.com/FEo4auHVfm

Promoted
Listen to the latest songs, only on JioSaavn.com
There was this hilarious comparison to stock shots:

And a much-needed reminder to focus on the bigger picture:

It was unfair to show the orb photo cropped. Here it is with full context and it is not weirder at all. pic.twitter.com/JZ9HXvC0Gf