Deer Jumps Over Woman, Kicks Her Head In Shocking Video

"Nobody's going to believe this but a deer hit me coming to work today," wrote Lynda Tennent while sharing the video 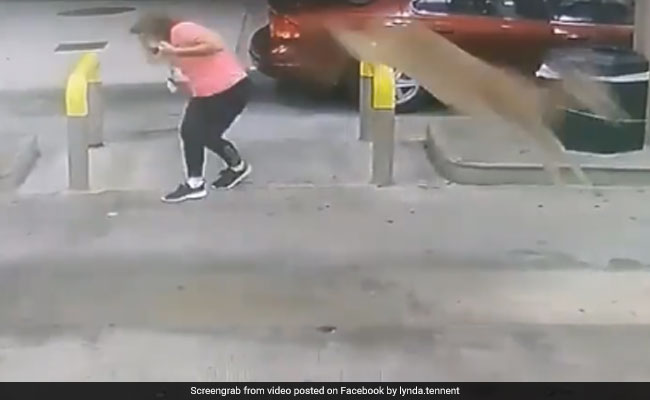 A shocking video shows a deer jumping over a woman.

A woman from Georgia, USA, was filling up her car at a petrol pump when she received a shock. Lynda Tennent posted a video to Facebook that shows the moment a deer jumped over her, kicking her head while doing so. The video of the attack has gone viral online, surprising many.

The incident occurred in Brunswick on Wednesday morning, while Ms Tennent was on her way to work.

"Nobody's going to believe this but a deer hit me coming to work today," wrote Ms Tennent while sharing the short video on Facebook. The video shows her standing in shock for a few seconds and grabbing her head after the deer vaults over her.

However, as concerned comments began to pour in, she assured everyone that she wasn't injured. "I am okay," she wrote in the caption. "I'm just thankful he jumped over me and hit me and not just run into me or cut me," she said in the comments section.

In the comments section of the video, she also added that she did not know what prompted the apparently-unmotivated attack. "I don't know what I did but I promise you I won't do it again," she said.

Since being shared on Wednesday, the video has been viewed over 10,000 times.

"Wow! Glad you're alright. Scary!" wrote one person in the comments section. "Oh my gosh...that's crazy!" said another.

Ms Tennent told News4Jax she was still in good spirits despite the deer attack. "You know the funny thing? I was just worried I was going to be late for work."