Daughter Of Firefighter Killed In Australia Wears His Helmet At Funeral 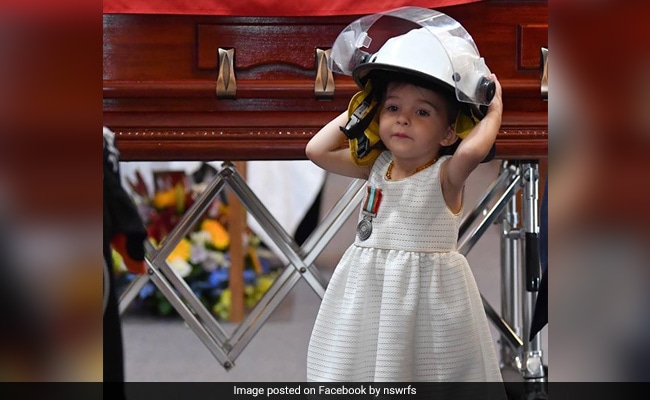 Charlotte O'Dwyer wore her father's helmet at his funeral.

The 19-month-old daughter of a firefighter who was killed battling Australia bushfires was presented with his helmet and medal of honour during his funeral. Volunteer firefighter Andrew O'Dwyer and his colleague Geoffrey Keaton died on December 19, when a burnt tree fell into the path of the fire engine they were travelling in, reports Sky News.

36-year-old Mr O'Dwyer was a veteran of the New South Wales (NSW) Rural Fire Service. On Tuesday, dozens of Australian firefighters formed a guard of honour and stood with hand on heart to bid him farewell at the funeral service in Sydney. Australia Prime Minister Scott Morrison was among those in attendance.

Andrew O'Dwyer's daughter, Charlotte, was presented with his service medal for posthumous commendation for bravery and service, along with his helmet, by Rural Fire Service Commissioner Shane Fitzsimmons.

"Baby Charlotte, you need to know --- your dad was a special man, a selfless man, and only left because he is a hero," an emotional Mr Fitzsimmons told the child, reports The Sydney Morning Herald.

Charlotte wore the helmet and medal for the remainder of the service, leading to many teary-eyed smiles.

After the service, Australia PM Scott Morrison and his wife hugged members of the O'Dwyer family.

Australia's months-long bushfire crisis has burned land, destroyed homes and killed people and wildlife.  The death toll from the fires has reached 26.