Caught On Camera: Meteor Lights Up Night Sky Over Chile

Residents of Santiago city heard the sound of the meteor crossing the atmosphere as if it were a burst of thunder. 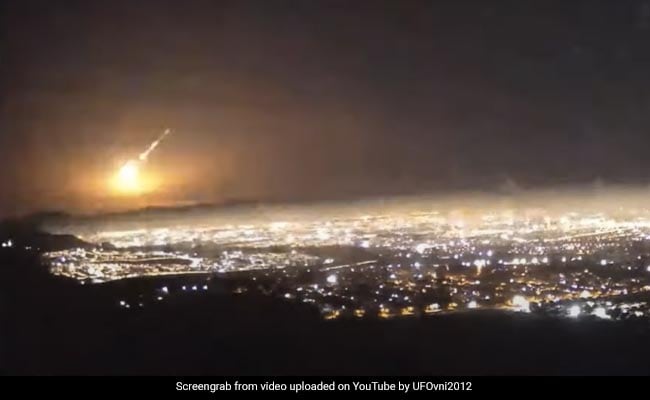 The meteor disintegrated into several parts before disappearing.

A meteor has been caught on camera streaking through the night sky over Chile's capital Santiago. Scholars from Concepcion University confirmed that the phenomenon, which was recorded on July 7, was a small body of rock which burned up upon entering the Earth's atmosphere, the BBC reported.

The meteor crossed the sky and opened a huge flashlight in the city of Santiago. Citing authorities, local media outlets reported that the meteor disintegrated into several parts before disappearing in the Andes region.

Mr Beamin explained that a flash lit up because, upon entering the atmosphere even a “stone, or a small rock, due to friction with the air, burns and shines”. “We are talking about speeds of 10,000 kilometres per hour,” he added.

Meanwhile, a meteor sighting in Chile came on the same day a burning meteor-like fireball flashed across the sky over Wellington, New Zealand. As per Reuters, witnesses reported hearing a loud boom and seeing a flash light as the object passed.

Alan Gilmore, an astronomer at Canterbury University's Mount John Observatory, said that a meteor coming down the atmosphere at a high speed over an urban area was a rare occurrence. He further went on to describe the meteor and said, “This was glowing very brightly so it must have been quite a big object.” Mr Gilmore also informed that the boom that people heard indicated that the meteor had come within 60 km of Earth.