Many witnesses have reported hearing a loud boom and seeing a flash of light as the object passed, according to news agency Reuters. 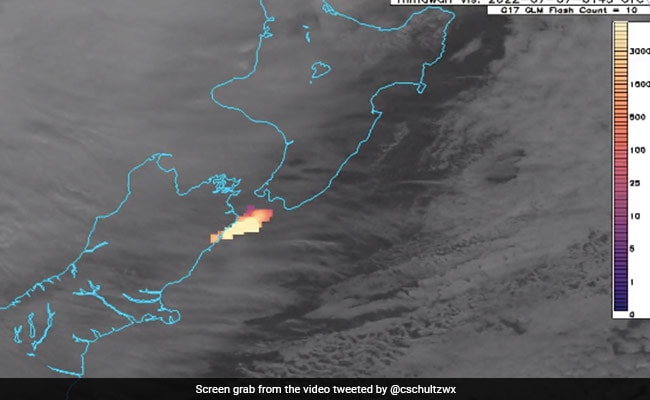 Weather scientists at MetService said they possibly spotted the object or its smoke trail on the radar.

A burning meteor-like fireball flashed across the sky over Wellington, New Zealand, on Thursday afternoon.

Many witnesses have reported hearing a loud boom and seeing a flash of light as the object passed, according to news agency Reuters.

Seismologists at geological agency GeoNet suspect that they had detected a sound wave from the object while weather scientists at MetService, New Zealand's national weather authority, said they possibly spotted the object or its smoke trail on the radar.

“An interesting signature from the Wellington Radar, at 1:52 pm. This shows a cross-section of the atmosphere, with what may be the smoke trail of the meteor that passed over the lower North Island. It's about the right place and time, and it's not meteorological.” MetService wrote on Twitter while sharing infographics on the meteor flash.

The vertical radar image scans over about 2.5 minutes so smoke trail likely affected by an eastwards drift in the westerly winds aloft.

The circles on the left, is from the radar slicing through virga (or light precipitation) aloft.

Alan Gilmore, an astronomer at Canterbury University's Mount John Observatory, witnessed the bright fireball hurtling through the atmosphere. As per Mr Gilmore, a meteor coming down the atmosphere at a high speed over an urban area was a rare occurrence.

“This was glowing very brightly so it must have been quite a big object. The boom that people heard indicated the meteor had come within 60 km (37 miles) of earth,” Mr Gilmore was quoted as saying by the agency.

One of the witnesses, a plumber named Curtis Powell, recorded the flash in his dashcam while he was driving at 1:39 pm that day, reported The Guardian.

“We were just driving to a job in Shannon when I saw a blue line falling in the sky, then a massive bright light,” he said.

Mr Powell added that he realised the flash was being captured in his dashcam and later downloaded the video.