Two men and two women travelling aboard the tourist boat were injured and taken to the hospital. 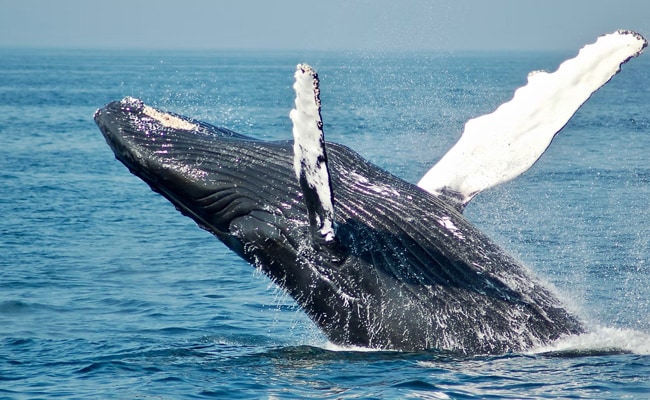 Humpback whales can weigh from 55,000 pounds to 66,000 pounds. (Unsplash/Representative Photo)

In a horrifying incident, a giant humpback whale breached and crushed a tourist boat in Mexico, injuring four passengers. The terrifying moment was caught on camera and shared on Twitter. It shows the huge whale leaping out of the water and landing on a boat, in Topolobampo bay of Ahome in the Gulf of California.

In the clip, one can see the large mammal leaping in the air to perform one of its characteristics acrobatic jumps. However, instead of landing back in the water, the whale crashed into the back end of the small boat on its descent. As a result, the boat appears close to capsizing but stays afloat.

According to news.com.au, two men and two women travelling aboard the tourist boat were injured and taken to the hospital. One woman broke a leg while one of the men suffered fractured ribs and a head injury.

BrujitaMerak, who posted the video, also shared a picture of the boat after the incident. In the images, one can see the roof of the boat completely collapsed and the railings destroyed.

The authorities blamed the boat operator for the incident because they got too close to the animal. As per the media outlet, Omar Mendoza Silva, the coordinator of Civil Protection in Ahome, believes that the whale felt threatened by the proximity of the vessel which ventured near the mammal despite the port authority ordering boat captains to keep a substantial distance away from the whales.

Separately, Newsweek reported that following the terrifying incident, Ahome Mayor Gerardo Vargas stated that the tourists should “not get too close to the whales”. “We can enjoy their beauty, but at a distance, prudently,” he added.

Meanwhile, it is to mention that humpback whales can weigh from 55,000 pounds to 66,000 pounds. Topolobampo bay is a popular whale watching area. And especially at this time of the year, pacific grey humpback whales are in these waters to breed.

Viral Video Shows Rickshaw Moving Without Any Help, Internet Compares It With Tesla